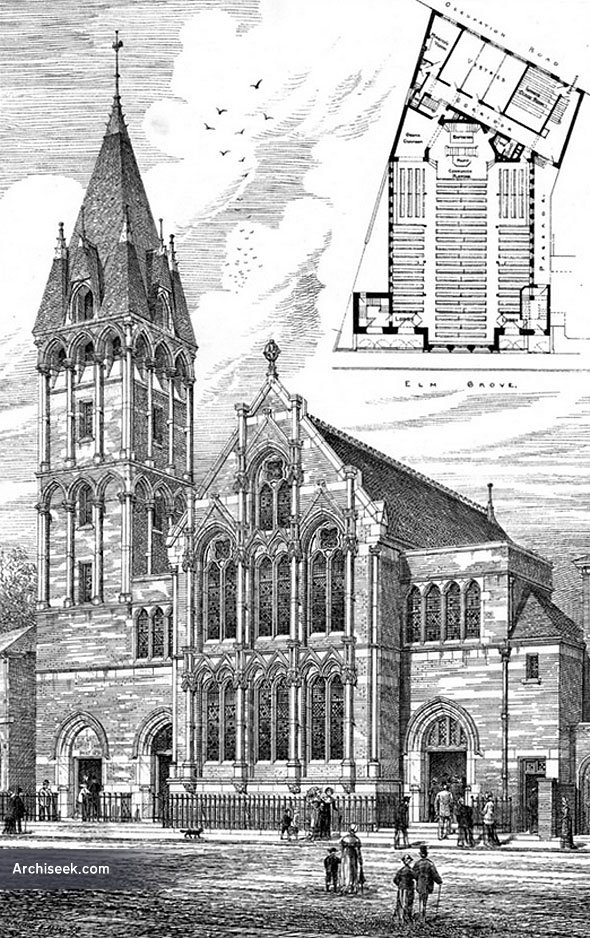 Perspective View including ground plan published in The Building News, November 21st 1879. Badly damaged during attacks on Portsmouth during the Second World War.

Published in The Building News, November 21 1879: “The site has a frontage of 71ft. to Elm Grove — a leading thoroughfare in the town — and is near to a convergence of several roads or streets, so that the tower will be a prominent object from all points of view. The restricted area of land has caused some trouble in the planning of the buildings, so as to secure good light to the church ; and the front elevation is specially de- signed to obtain the utmost amount of window opening. Being nearly due north, this is feasible without glare. All external walls seen from Elm-grove will be faced with red bricks from Fareham, and all the dressings are to be of Bath stone. The roofs will be slated, and the spire also. Internally, the church will be divided transversely into nave and aisles by arcades of five bays, the columns being cast iron, and the whole of the ceilings groined in plaster. The groin ribs will be deeply moulded, and the treatment generally will be a wide departure from what is usually attempted in structures of this class.

The accommodation in the church is for 800 adults, in appropriated sittings, including side and end galleries. The school-room, 55ft. by 26ft., will be over the ground-floor class- rooms, and will communicate with the church galleries. Scholars will enter from Occupation- road, in rear of the site. The spire will be 110ft. high to the top of the vane. Messrs. W. R. and C. Light, of Portsmouth, have taken the contract for £6,2.50 ; and the works are to be commenced forthwith. The architects are Messrs. H.J. Paull, F.R.I.B.A., and A. A. Bonella, 9, Montague-street, Russell-square, W.C. “