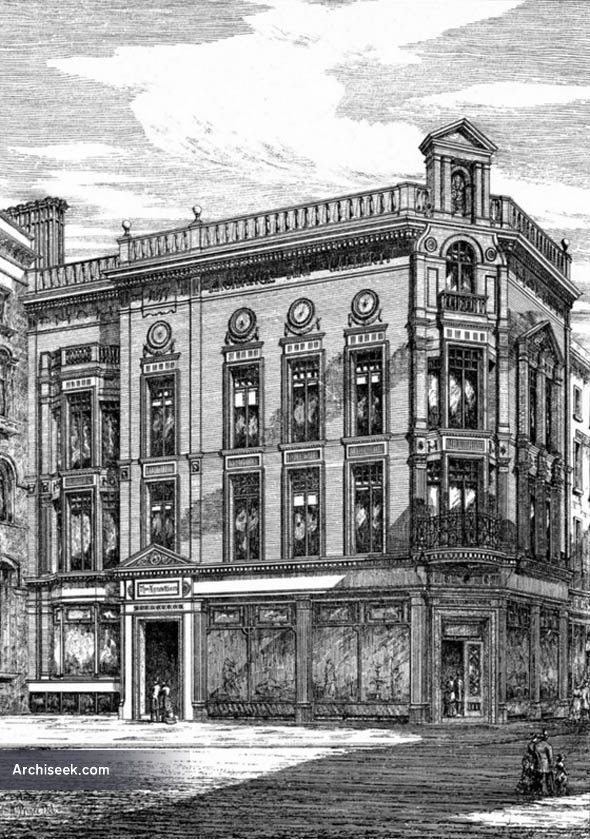 Commercial art galleries for Messrs. Agnew & Sons, published in The Building News, September 20th 1878. Agnew & Sons were prominent art dealers, with premises in Manchester and London with an International reputation. A prominent site at the junction of Dale and Castle Streets, the building has a chamfered corner. Built in red brick with terracotta ornament, the building stands today intact as designed, and in used as a bank branch.

“Messrs. T. Agnew and Sons’ new galleries at Liverpool, which we illustrate this week, are noticeable for the material employed. The whole of the outside work, with slight exceptions, is finished with bricks. The cornices, mouldings, and carving are all executed in red brick, every brick being in fact worked on the premises for its position, and the carving executed after the work was set, in the same manner as the galleries of Messrs. T. Agnew and Sons in London. The whole of the woodwork in the portion of the premises occupied by Messrs. Agnew is executed in “real” woods, including American walnut and French black wood and pitch pine. The walls throughout are lined with material, thus avoiding all necessity for paint. The staircase, with its peculiar soflit and lead lights, and the ante-room at the top are especially noticeable features. The large picture gallery is lighted by a top light around the ceiling abutting on the wall line instead of in the centre of the ceiling. The contractors for the work were Messrs. Haigh and Co., of Liverpool ; the marble mosaic floor by Messrs. Trollope, of London, who also provided the material for covering the walls, &c. Messrs. Salomons, Wornum, and Ely are the architects.”