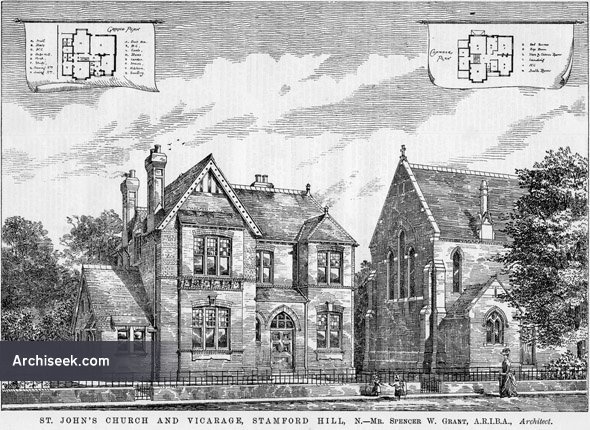 Perspective View including ground & 1st floor plans, published in The Building News, March 21st 1879. “This church, completed last year, is built of red bricks, Red terracotta and Mansfield stone are used for large west and for east windows, the only Bath stone introduced being for columns of nave, baptistery, and chancel arch. The dimensions are as follows:- Nave, 85ft by 27ft 4in; height to top of wall plate 32ft; chancel 32ft by 24 ft, and the vestries are divided by a folding partition, making a room 28ft 9in by 13ft, for confirmation and other classes; there is also a semicircular baptistery under west window, and an organ-chamber, 17ft by 14ft. The tower has been omitted for the present. The total cost of the work has been 5,450 (exclusive of architect’s commission), the accommodation being for 650 persons. This includes font and pulpet in Caen stone by Mr. Gilbert Seale of Walworth. Mr John Grundy carried out the heating and the whole of the works were executed by Mr. James Holloway of Lavender-hill, Wandsworth.

The architect’s instructions as to the vicarage were that the cost should not exceed 1,500 for everything. This involved a plain residence, including, however, all the accommodation required by the Ecclesiastical Commissioners, and by a judicious arrangement of plan, the position of rooms being rendered necessary by the site, a somewhat picturesque house is obtained, which groups well with the church so closely adjoining it.”