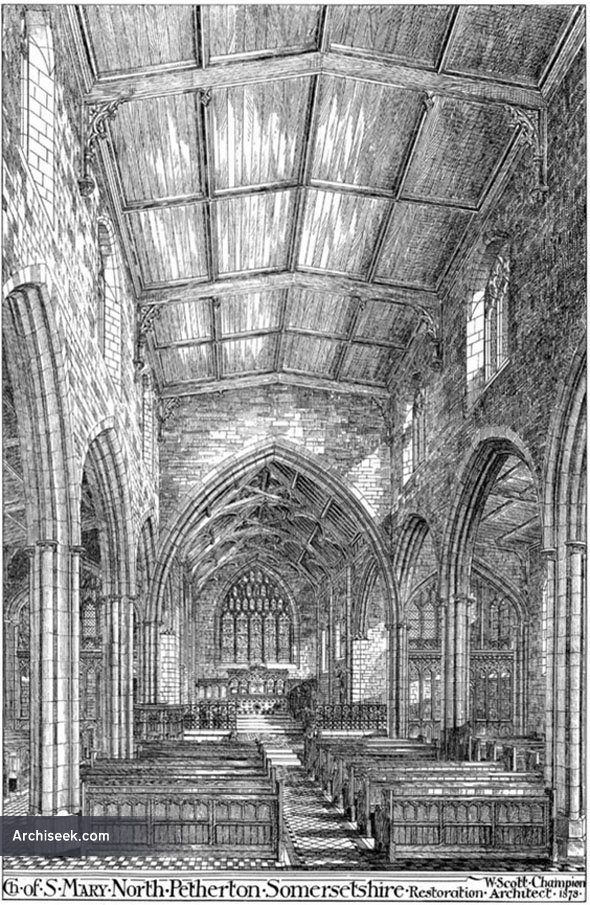 A 15th century Church, located in the centre of the village, with a 109 foot three stage tower.The tower dates from the 1540’s and is one of the finest examples of the Perpendicular style in Somerset. The architectural writer Pevsner described it a “tour de force” in a county particulary rich in church towers.

Illustration of the interior as restored by Champion, published in The Building News, August 2nd 1878. “The Church of St. Mary, North Petherton, is a fine example of late fifteenth-century work, with a chancel the foundation of which is of earlier date ; the only remaining portions of this style are the shafts of presumably stone groining of the roof, and the earlier pitch of the chancel roof. But the whole fabric must have been so entirely “restored” by the later additions that it can only now be classed as one of the late fifteenth-century churches so well known in Somersetshire. The general scheme includes new roof to chancel, restoration of the existing nave and aisle roofs, re-seating the nave, choir stalls for chancel, but very little exterior work being contemplated. It is proposed to carry out the works as funds permit, and in separate contracts ; but the estimate given by Messrs. Wall and Hook, the builders, is about ^£.3,000 for the whole scheme. One of the principal features in the church is the wonderfully elaborate tower, which, with perhaps the exception of Hush Episcopi, in the same county, is one of the finest examples of the late fifteenth-century tower, common to this part of the county. The works will commence with the flooring and raising the sanctuary floor, and it is then hoped to commence the seating, and in the plans care has been taken to preserve all the Jacobean seats, which are of interesting design, and to place them lower by removing a huge sill, which is an idea of the early part cf this century. The aim of the architect has been to preserve every portion of the old work that has not entirely fallen into decay, and the greatest care will be taken that no ” new work” will be inserted where it is possible to retain the old. Mr. William Scott Champion is the architect, and Messrs. Wall and Hooke, of Briscombe, the builders. “