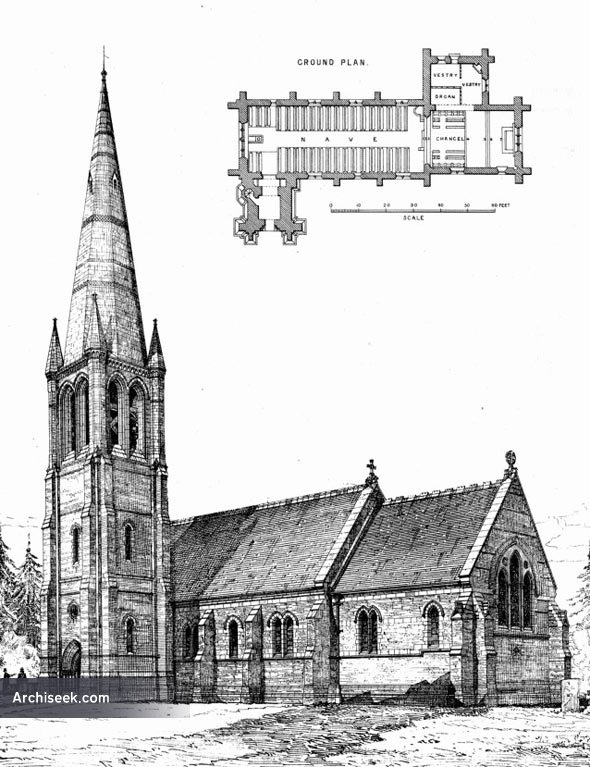 The present parish church, All Saints, was built in 1872 and succeeded a previous building on the same site dating from 1830. It is constructed of red brick with stone dressings, consisting of a chancel with north vestry, nave and south-west porch, with the tower above.

THIS church (see illustration) is built on the site of a modern building of 30 years since, which was erected two miles further inland to replace a church of the twelfth century then pulled down in consequence of the encroachments of the sea. Being in bad repair and of poor construction, this modern church has given place to the present, for which funds have been chiefly provided by J.P. Kennard, Esq., of Hordle Cliff, a parishioner. The whole cost, when the tower (now building) is completed, will be about £6,000.

The work is of red brick, with dark pointing externally and internally, and the roofs are covered with Welsh slate and red tile crestings ; the dressings are of Bath stone. The chancel measures 30ft. by 20ft. on plan, and is floored with Maw’s tiles, and seated with oak stalls with seats for boys. The altar is raised seven steps above nave floor, and is of oak, carved, with a reredos by Mr. Forsyth, of five arched panels, the centre containing our Lord sculptured sitting with the book of the Gospel and orb ; the side panels are filled with the Evangelistic symbols in Venetian Mosaic. There are also carved piscina and credence with sedilia. A metal screen, by Messrs. Richardson, Slade, & Co., of Brownlow-street, closes the chancel from nave. The roof is open-timbered, with trefoil arches and traceried cornice, and is of pitch pine. The east window, of three ligliLs under one arch, is filled with painted glass by Heaton, Butler, & Bayne., with Crucifixion in centre, and the Resurrection and Christ appearing to Mary in the side lights. On the south side there is a single light, by the same artists, who have been commissioned to execute the two other windows of the chancel.

The nave, 63ft. by 22ft. 6in., is seated with open benches of pitch pine, and has a roof of yellow fir of simple cradle form. The ghass is by Mes=r,s. Adams & Cocking, in patterns of two tints. On the north side there is a memorial window of members of the family of Lieut.-Col. Raitt, by Heaton, Butler, & Bayne. The vestries and organ chamber, with vault for Moule’s heating apparatus, are on the north side of the church. Mr. Thomas Lauder, of Burton, near Christchurch, is the builder.