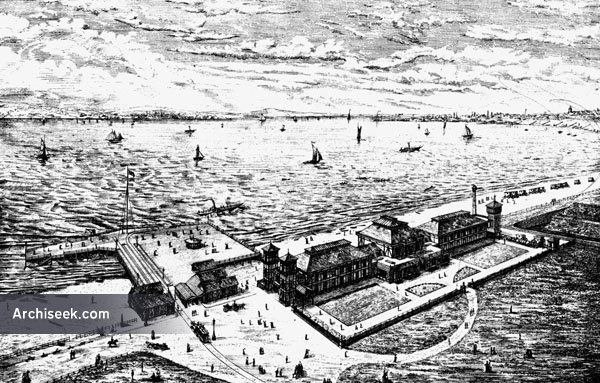 On the 10th January 1941 Clarence Pier was bombed during the heaviest air raid on Portsmouth of World War Two and the Clarence Pier Pavilion and the Espanade Assembly Rooms and Hotel were no more.

“A popular but comparatively young watering place has just received a finishing stroke in the way of improvement, which enables it to be placed on a par with the older and better-known sea-side resorts in point of artificial convenience, as it already equals them in natural advantages. Indeed, but a few years since, Southsea had all the inherent advantages common to most watering places, but none of those conveniences without which it would be hopeless to expect visitors. It was within an easy distance of London, but had a very defective train service; with a splendid beach, bathing was next to impossible by reason of want of machines; and so on, and on. But gradually all this has been changed. The South Coast or South Western takes us down in a couple of hours; the shingly common has been levelled and turfed, and has a splendid esplanade along the whole length of the shore. These and many other improvements have almost entirely changed the aspect of the place, and now, within the last few months, an undertaking has just been accomplished which cannot fail of good results, both to itself and to Southsea.

The Southsea Baths and Assembly-rooms, to which we refer, and a plan and perspective view of which we illustrate this week, are situated at the extreme west of the common by the side of the new pier, directly facing the sea, and consist of buildings 326 feet in length in the Italian Swiss style. The War Department, on whose property the building was erected, restricted their lessees using either brick or stone in the construction, fearing that a too permanent class of building might, at some future time, possibly interfere with the general plan of the Portsmouth defences. Consequently, with the exception of the engine and boiler-house and water-tower, which are of brick, the whole of the baths and assembly-rooms are constructed of timber, rough cast outside, resting on four feet of brickwork, with four feet layer of concrete under all, and are covered with an iron roof.

The general effect of the buildings, notwithstanding this enforced paucity and poverty of materials, is satisfactory, while the plan and arrangements of the interior of the buildings are very skilfully contrived. The extensive length of the structure is broken into three sections, and is flanked at one end by two lofty Belvidere towers, and at the other end by the water tower and engine chimney. The two end blocks are about 45ft. high, and the. centre block about 50ft. high, each having an ornamental iron and glass skylight 4ft. high, with finials. The Belvidere towers have projecting slate roofs, and have balconies running round them, from which extensive views of the sea, the Isle of Wight, and the country inland can be obtained.

If we were to make a suggestion, it would be that a light iron balcony or verandah should be added to the sea front, which now presents a somewhat bald appearance. The means of ingress and egress are ample, there being entrances on nearly every side, the principal being at the esplanade end. This leads us to a spacious vestibule opening into the main assembly-room, which occupies nearly the whole of the eastern block, forming a fine saloon 80ft. long by 40ft. wide, with a minstrels’ gallery at one end, below which are the vestibule and cloak-rooms. It has a number of French casement windows on either side, opening on to the croquet lawn, and to a terrace on the sea beach respectively.

The wall decoration of the inside of the assembly-room is somewhat Classic in treatment, buff and chocolate brown being the base colours, leading up to blue and white in the roof. This, combined with the open ironwork of the roof and skylight, produce a light and pleasant effect. From the iron roof hang down starlights at the intersections of the trusses.

Two wide passages lead us from the assembly-room to the central block, which comprises the ladies’ swimming-bath, with a clear water space of 40ft. by 22ft. 6in., with dressing-boxes fitted up round the bath, a supper-room, billiard and smoking rooms, board-room, manager’s apartments, and nine ladies’ private baths, which are ranged round in a gallery above the swimming bath.

Lastly, coming to the other end block, we have a fine swimming-bath for gentlemen, being 70ft. long and 22ft. 6in. wide, in clear water space, and having a maximum depth of 7ft. and a minimum depth of 3ft. 6in., with dressing-boxes on either side, and with thirteen private baths arranged in a similar manner to the ladies’, with lavatories, &c, attached.

The engine and boiler-house, engineer’s apartments, laundry, and drying-closets occupy the extreme end of the buildings. All the baths can be supplied with salt or fresh water, either hot or cold, and strained from all impurities at any time of the day and all through the year. The assembly-room, billiard-room, and corridors are heated by steam pipes, in coils or underneath the floors, and fresh air is introduced through the channels in which the coils are laid; there is communication all over the building by means of electric bells; and, indeed, we find everywhere that marked attention to details which goes so far to securing the success of a structure. There are two five-horse (nominal) engines, with three boilers which have been proved up to 1001b. pressure to the square inch.

The cost of the whole building complete, including engines, fitting, &c, is under £10,000, of which the engine-work generally (by Messrs. Gimson & Co., of Leicester) cost about £1,200. The gas-fittings, which are numerous, well placed, and in good taste, were manufactured by Messrs. D. Hulett & Co., of High Holborn. Mr. Chevallier, of London, executed the decorations, and Messrs. Neave & Fry, contractors, of London and Landport, took the general contract.

The whole of the works were carried out from the designs and under the superintendence of Messrs. Davis & Emanuel, 2, Finsbury-circus, City. Since the opening of the establishment it has been extensively used for swimming matches, concerts, fancy balls, and for public dinners and receptions.” Published in The Building News, October 6 1871.