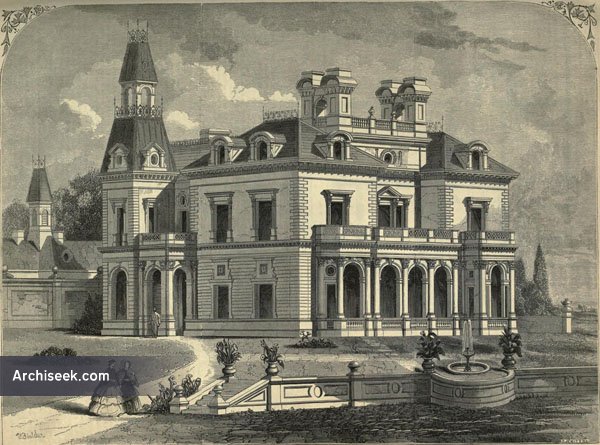 Published in The Building News, March 23 1860. “We engrave this week a view of the terrace front of Llwyn-house, a mansion in course of erection at Oswestry, from the designs of James Blake, Esq., R.I.B.A. It comprises a substantial block of building, about 60 feet square. The principal apartments are grouped very conveniently round a large central hall, which is approached by a corridor from the open porch shown on the left in our Engraving. The two wings of the terrace front are connected by an open loggia in front of the library windows. The chimneys linked together by balustrades and open arches, form a striking feature in the composition, and give considerable picturesqueness and variety to the design. A finer site than that on which the building stands could hardly have been selected, or one which commands more delightful prospects. It is on rising ground, about half a mile from Oswestry, and is sheltered from the north and west winds by an abrupt belt of high ground, (such belts are peculiar to the neighbourhood) already covered with beautiful woods. The other aspects are entirely open.

The south-east or front towards the pleasure-grounds commands the rich and immense vale of Shropshire and the adjacent counties, in many portions risible to a distance of at least 50 miles. The south-west or entrance front overlooks the town of Oswestry, and the beautifully variegated distance beyond it is terminated by the bold and picturesque chain of mountains which divides England and Wales. The limit of this view upon what may be termed comparatively level ground is not perhaps exceeded in extent or beauty by any other in England, and the many land- marks associated with the exciting history of the locality visible from the spot, gives it an invaluable and enduring interest.

The structure is faced with Cean stone, and the finer work with Corsham-down Bath stone. It will be replete with every modern convenience, and is to be finished in a plain, bold, but commensurately decorative character with the exterior. The style is no particular choice, but the architect has wished to show — in contradiction to the expressed opinions of some one-tided style advocates — the compatibility of palatial, or, as it is now often termed, club-bouse architecture, when judiciously treated and broken up, with country scenery, and the necessities of a country mansion. The name is Welsh ; and as its pronunciation may puzzle English readers, we may mention that its nearest English spelling would be Looin, which is sufficiently euphonious.”