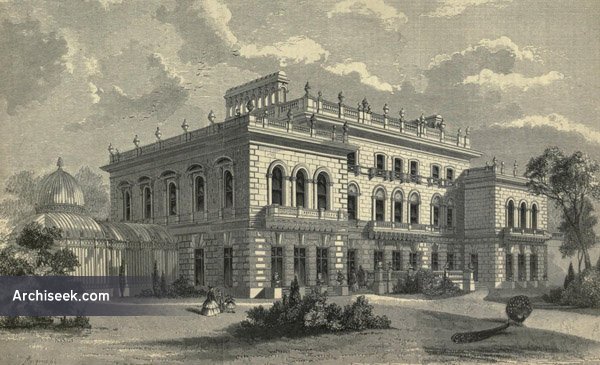 Little Aston Hall was originally constructed around 1730 by Richard Scott of nearby Great Barr Hall, in a Georgian style. The house was restyled by architect James Wyatt for William Tennant in the early 19th century and was enlarged and improved at a reputed cost of £35000 in 1857. The estate was broken up in the early 20th century and after a number of commercial and institutional uses, the house has been subdivided into upmarket units. It is Grade II listed. Published in The Building News, March 2 1860.

“OUR Engraving illustrates the south-west view of Little Aston Hall, near Shenstone, the seat of the Hon. E. S. Jervis. The architect is Mr. E.J. Payne, F.I.B.A., of Bennett’s-hill, Birmingham. The building (an example of the tasteless Ionic of the last century) was originally a parallelogram, but in its present restored and greatly extended condition forms a centre, with two noble wings 14 feet in advance of the main portion. The style adopted is that of the fenestral Italian, elaborately enriched, and the material used throughout is Hollington stone. “The elevation of the ground floor is rusticated, and the windows square-headed, with projecting keystones, the quoins and dressings being vermiculated.

The first-floor windows in the centre, on the south front, consist of a triplet, with a couplet on either side, all terminating in semicircular heads, the arches being closed with receding carved shells, and the dressings consist of Ionic pilasters, with enriched carved capitals, surmounted by elaborately decorated architraves. The windows to each wing are also triplets, terminating in semicircular heads, the dressings and architraves being similar to those in the centre, but the arches left open for light. The centre rises one story higher than the wings, and the dressings to the windows of this upper story consist of balconies supported on trusses with plain moulded architraves. The capping and sills of these balconies range with a string course below the frieze and the lower member of the main cornice of the wings; and this portion of the edifice is terminated by a bold and handsome cornice, surmounted by a balustrade course, on the piers of which are placed terminals, the design being a pine-apple belted.

The west front is lighted by five windows on each story, and the centre window on the ground floor is intended to open into a conservatory, 60 feet in length, terminating in a square, out of which rises a dome. The first floor windows have semicircular heads, with panelled and moulded architraves, terminating in carved consoles supporting segmental pediments ; and the cornice and balustrade correspond to those of the central portion of the building.

The north front resembles tliat on the south, all the details, though somewhat less elaborate, presenting the same characteristics ; the only material difference being the addition of a noble portico of six Doric columns; the piers of the balustrade course above being finished with terminals, in accordance with the general design. On the eastern side the offices adjoin the main building.

The chimneys are arranged in two stacks, one on each side of the central portion, each group forming an ornamental arcade, surmounted with trusses and cornices. The beauty of the south front is greatly enhanced by a terrace occupying the entire space between the wings, access to it being gained by two broad flights of steps, and the whole is guarded by a balustrade with piers ; these, as also those between the windows of the wings, are crowned by large vases of flowers; and all the ground floor rooms ©pen to the terrace.

The whole of the doors on the ground-floor are arranged in a line, so that, when open, a complete view through the entire length of the house to the western termination of the conservatory, may be obtained from the eastern side of the dining-room. The fittings of the various rooms are of wainscot, french-polished ; and the floors of oak, with a beautifully executed border of parqueterie, supplied by Messrs. Arrowsmith, of London.

All the rooms are heated by the warming apparatus of Mr. J. E. Hodgkin, of Birmingham, the hot air passing through perforated brass gratings in the windows. The water for the supply of this extensive establishment is brought from a distance of nearly a mile, being propelled by means of a ■water- wheel into an immense cistern on the roof, 135 feet above the level of the spring, and thus affords an ample security in case of fire.

The whole of the works which are now complete, with the exception of the conservatory and the second terrace balustrade, have been executed by Sir. Cresswell, of Birmingham, whose foreman was Mr. Daniel Hopkins, Mr. Henry Beeson being the clerk of works.”