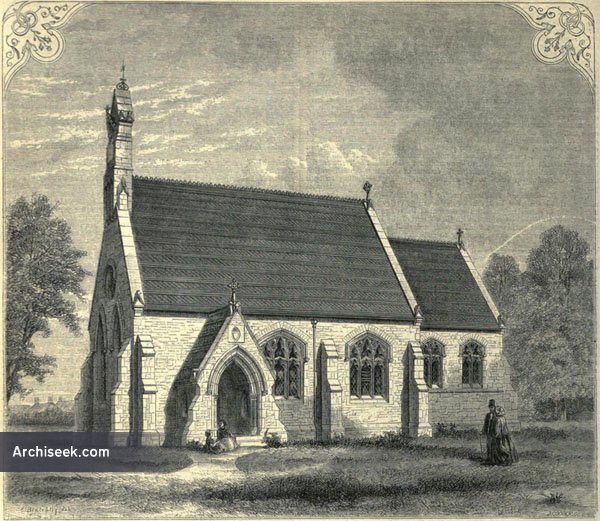 Illustration published in The Building News, August 10 1860. “This church was erected in 1855. It is situated on an elevated spot near Croston Hall, the seat of S. Robt. Trafford, Esq., at whose expense the church has been erected. It is built of local stone, in regular sized courses, of a purplish green hue, which forms a good contrast to the dressings, which are in the yellow Ormskirk stone. The roofs are covered with Staffordshire blue tiles. Interiorly, the whole of the roofs are divided into panels by pitch pine moulded ribs. The chancel arch and angles of windows, &c., are in Bath stone. Tlie arcading which divides the sanctuary from the sacristy is enriched by gilt metal screens, by Messrs. Hardman, of Birmingham. The sanctuary is furnished with a Caen stone altar, enriched with marbles, the reredos of which contains angels in attitudes of adoration turned towards the tabernacle, which is metal gilt on each side are placed stalls for the celebrant and servers. The east window is filled by a rich toned glass by Hardman, and was presented by Mr. Trafford’s brother. The cost of the work, exclusive of fittings, is £1,100. The contract was carried out by Messrs. Lane and Lewis, of Birmingham. The work . was executed from the designs and under the superintendence of Mr. Welby Pugin.”