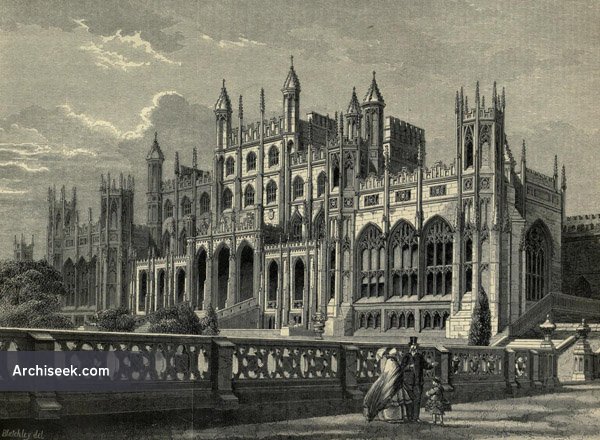 When Robert Grosvenor, then the 2nd Earl Grosvenor, and later the 1st Marquess of Westminster, inherited the Eaton estate in 1802, it was decided that the Samwell-designed hall had become old-fashioned and in need of renovation. Grosvenor appointed William Porden to plan the improvements. Building started in 1803 and it took just under ten years and cost over £100,000.

When Richard Grosvenor, 2nd Marquess of Westminster, succeeded his father, he commissioned the Scottish architect William Burn to make alterations to the house. Burn raised the centre of the south front to make it look like a tower, and changed some of the external Gothic features. The architectural historian Nikolaus Pevsner described this house as a “spectacular Gothic mansion”. The 2nd Marquess died in 1869 and was succeeded by his son Hugh Lupus Grosvenor, initially the 3rd Marquess. He appointed Alfred Waterhouse to design another new hall, replacing this building. The work began in 1870, took 12 years to complete. 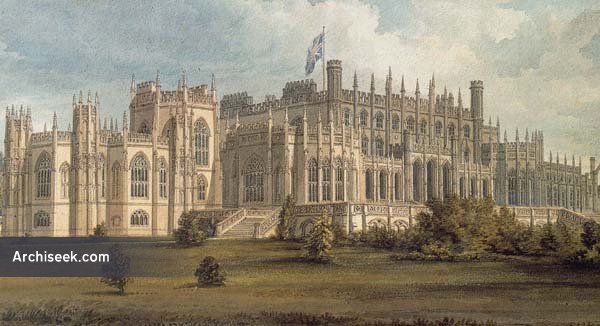 From The Building News, September 28, 1860. “THE principal seat of the Right Hon. the Marquis of Westminster, stands in a fine park, watered by an inlet of the river Dee. It commands a luxuriant view, bounded by the Peckforton and Bickerton hills, and the high lands of Delamere Forest. A mansion existed here before the seventeenth century, known as Eaton Boat, from its proximity to the ancient ferry of that name across the Dee. This house was destroyed, and a new and larger structure was erected from designs by Sir John Vanbrugh, during the time, and by direction, of Sir Thomas Grosvenor.

In 1803 the building shared the fate of its predecessor, having been then removed to make way for the centre portion of the present structure, from designs by William Porden. The works as then proposed were completed in about nine years from the date of commencement, the walls being faced with white freestone, from the Manley quarries. Between the years 1823 and 1825 two wings were added, nearly doubling the original length of the building ; and in 1845 the greater part of the mansion was repaired and altered under the direction of Mr. Burn . The total frontage is about 700 feet, while the great corridor is said to be nearly 500 feet long. The chapel, about 40 feet by 30 feet has a groined ceiling. The dining and drawing rooms are each about 50 feet long by 30 feet wide.

Our illustration shows the east front. The principal entrance is on the west side. This may be considered one of the very few Gothic buildings erected in the earlier part of the present century that it would be thought desirable to illustrate.”