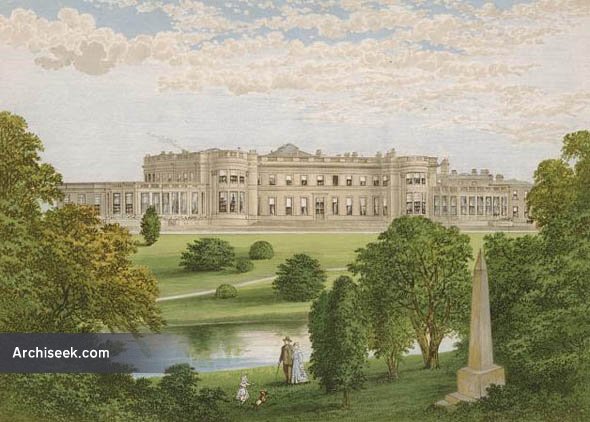 Wynyard Park was the family seat of the Vane-Tempest-Stewart family, Marquesses of Londonderry, an Anglo-Irish aristocratic dynasty, but it was sold in the 1980s. The mansion was started by Benjamin Wyatt and completed by Philip Wyatt for the third Marquess of Londonderry, who spent the then enormous sum of £130,000 to build and furnish the House. In 1841, just as the mansion was being completed, a fire broke out and gutted the house; it was later restored and remodelled by Ignatius Bonomi.

Designed by Philip Wyatt, the entrance front has 13 bays with a 6-column giant Corinthian Portico. The entrance hall was similar to that of Mount Stewart, the family’s estate in Northern Ireland. It has a coffered segmental tunnel vault with apses at both ends and in the middle. There was a large crystal chandelier suspended from the ceiling. The main octagonal centre hall extends the full height of the house and has a dome with caryatids around it and a skylight. There is also a mirrored Drawing Room with a gilded and painted ceiling, and a vast ballroom similar to that of the family’s London residence, Londonderry House. The building is now a hotel.