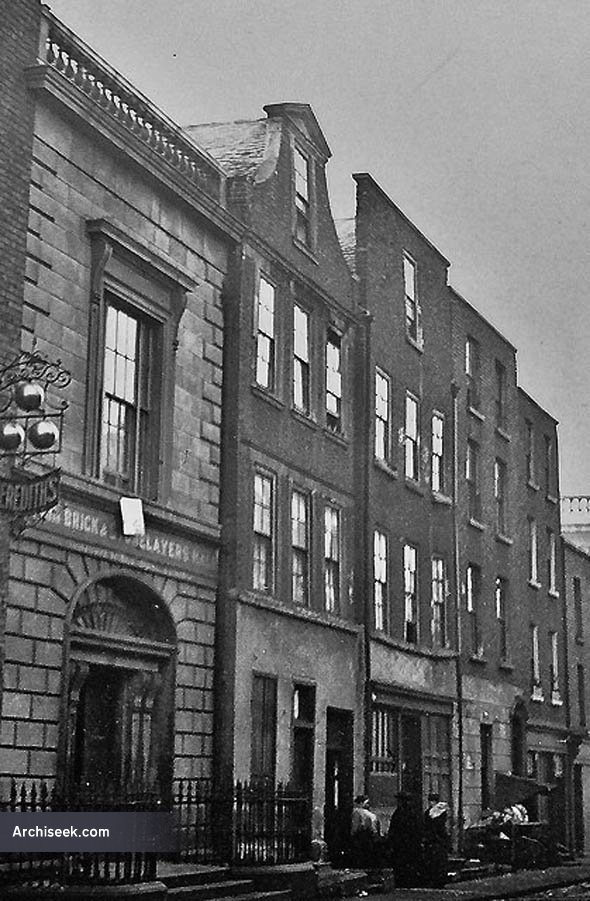 The headquarters of the Bricklayers’ and Stonecutters’ Guild, originally built as the ill-fated St. Peter’s Parish Savings Bank. In the 1820s the savings bank had been embezzled by William Bruce Dunne, sexton of St. Peter’s Parish, who doubled up as both cashier and book-keeper. It is believed that he helped himself to about £16,500 before being found out in 1831. The bank later failed in spectacular fashion in the mid 1840s. When it finally closed its doors on 10 May 1848 its liabilities had reached nearly £65,000 against assets of £100 or so.

Demolished to make way for the creation of a dual carriageway through Cuffe Street, the Bricklayers Hall was the subject of a later court case. Originally Dublin Corporation (now City Council) offered the union a sum (£87,857)for demolition of the building. The union contended that they’d like to preserve the facade and move it to their new building. So the city increased their offer to cover dismantling and re-assembly on the new site, and only purchased the strip of property that they needed for £224,414.

The building facade was carefully taken down and to this day has not been re-assembled. In the 1990s, the city attempted to recover the money paid as it contended that the union had unfairly profited from it. In 1996, the union was ordered to repay almost 159,000 by the High Court.