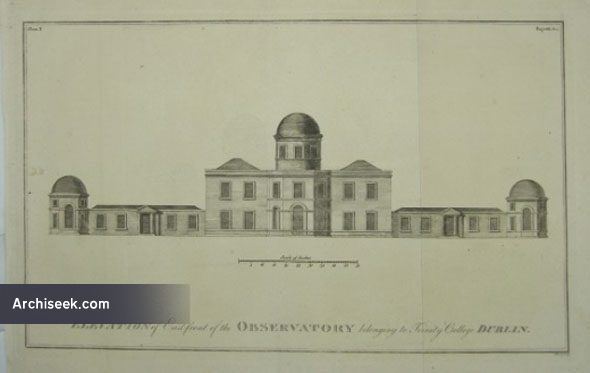 The Dunsink Observatory is an astronomical observatory established in 1785 in what was then outside of Dublin by Trinity College Dublin. The site was selected for its elevated position and views over the surrounding landscape. At the time, Dublin was four miles away and Finglas was a small village, a perfectly dark location, far from the city lights, for star-watching. The design of Dunsink incorporated a number of novel ideas. The main telescope was mounted on a granite pier which is independent of the building that surrounds it. Circulation of air within the dome was intended to give sharper images of the stars. The observatory was restored in recent years. The telescope, then no longer state of the art, was used mainly for public ‘open nights’.

Described in Lewis as “The building fronts to the east, and consists of a centre and two receding wings, the former surmounted by a dome which covers the equatorial room, and is move-able, having an aperture two feet six inches wide, which can be directed to any part of the horizon; around the dome is a platform, which commands an extensive and varied prospect.”