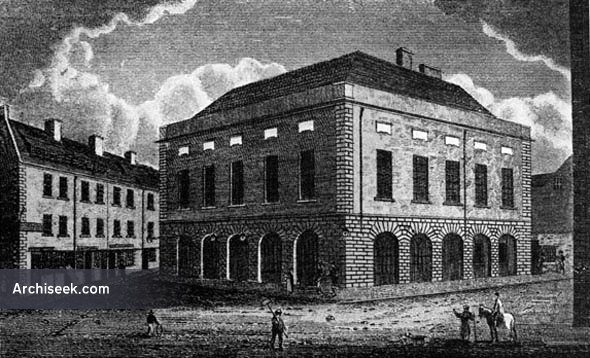 In 1769, the Earl of Donegall, celebrating the birth of his son George Augustus, paid £4,000 for the building of a single storey building called “The Exchange” By1776 a second storey was added by the distinguished London architect Sir Robert Taylor.

Now known as “the Assembly Rooms”, his new addition cost the Earl £7,000. It was converted to a bank in 1845 by Sir Charles Lanyon who chose to encase the exterior of the Exchange in elaborate stucco.

In 1792, ten Irish harpists congregated for the historic Belfast Harp Festival. Their music was notated by Edward Bunting and a revival of traditional Irish music began. In the aftermath of the 1798 rebellion, the Assembly Rooms were pressed into service as courtrooms for the trial of rebel leader Henry Joy McCracken of the Antrim Unitedmen, who was subsequently hanged in public exhibition in the High Street. In recent years the building served as a home for the Lyric Theatre.