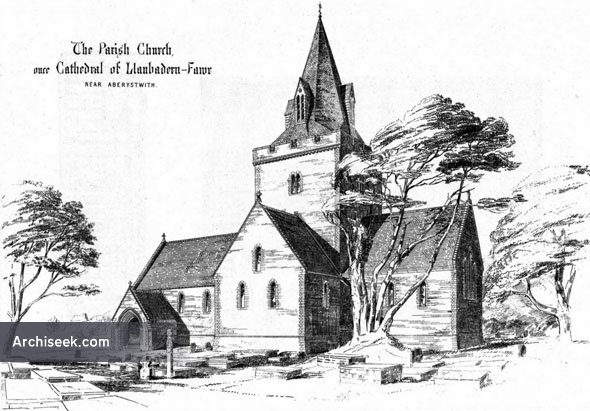 The site has been used for Christian worship since it was founded by Saint Padarn in the 6th century[1]. It was rebuilt in the thirteenth century after a fire, and is a fine large aisleless cruciform church with transepts and a substantial central tower, some 163 feet long. It was extended around 1475, and the wagon roof over the chancel was boarded or plastered in 1491 by John Stafford (1476-1516), Abbot of Strata Florida Abbey. The roof is finely finished with bosses at the intersection of the moulded principals and purlins.

The church, listed grade I since 1964, was substantially restored in stages 1867-84 by John P. Seddon, and the roof was renewed, apart from the wagon roof over the chancel, which survives above Seddon’s roof. The church contains two mediaeval crosses, moved in the early twentieth century inside the church. The church was a monastery until the twelfth century, and had been the seat of a bishop during the years immediately following St Padarn, who was its first bishop.