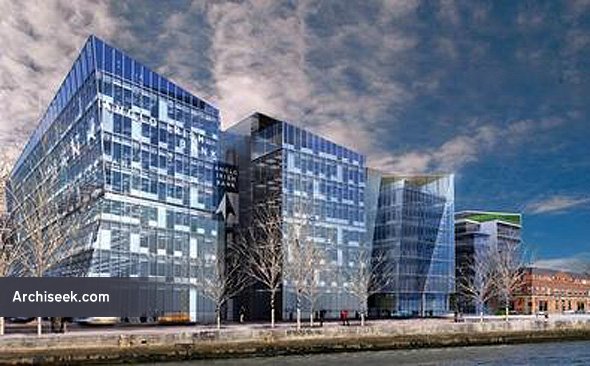 With the collapse of Anglo-Irish Bank and indeed their architects Traynor O’Toole, work has been stalled for several years on this building. Presently a concrete shell on the quays, the original design of the project saw two eight-storey buildings, slightly angular in form. They both sported fully glazed double skin facades that gave a slate-like look to the project.

Sustainability was the watch word of the design with features such as a geothermal bore hole system which would heat and cool the building, thermal mass cooling, low energy lighting, rainwater harvesting and a comprehensive water and waste management system all of which would have lead to a BREEAM certificate of excellence.

The Central Bank has announced that it is to buy the half-completed Anglo Irish Bank building on Dublin’s quays for about €8m.