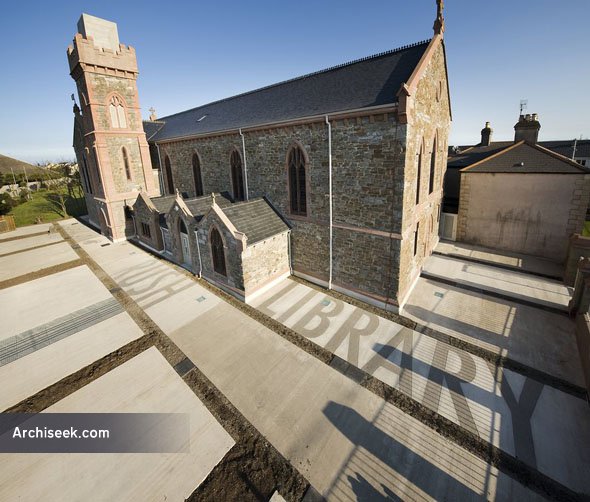 The former St Maur’s Church stands on the site of an 18th century chapel but looks irreproachably Victorian, pink surrounds and grey stone walls (once rendered against the wind driven rain off the sea), Gothic windows and tower; it was deconsecrated and served as an arts centre until 2007, when the local authority, Fingal County Council, commissioned McCullough Mulvin Architects to transform it into the town library.

Minimal repair was taken as the approach; the roof was repaired using natural slates; the Gothick ceiling carefully cleaned down, the monuments pieced together, windows re-leaded, the typical wood-grained doors and lobbies conserved, the value of ordinary, even humdrum, elements of religious life taken as valuable in themselves- an absence of excluding judgement regarding the building as found.

The intervention is formed as an undulating walnut plane which fills the nave running across the floor and up on both sides; in section, it forms an inverted U – with two galleries, one narrow, the other – wider- supporting a meeting and performance room. Externally, the concreted over churchyard became a garden, strips of concrete inset with names of the town and the library interspersed with drainage channels planted with grasses and vegetables, the spirit of the graveyard – and the towns agricultural basis – extended for a new generation.