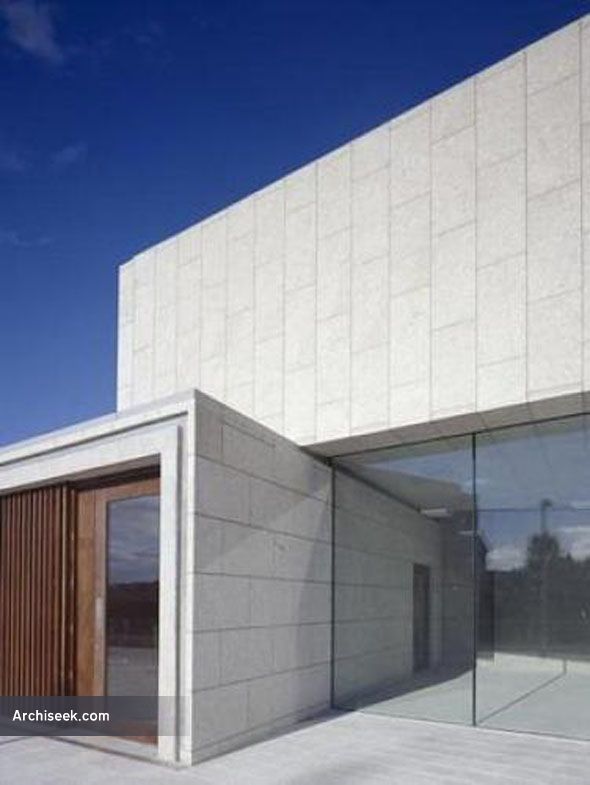 The refurbishment and extension of the Library in Baldoyle to include a Local Government Office for Fingal County Council services provides the opportunity to reassess the relationship between these public functions and the village of Baldoyle. The existing Library – which is barely noticed by the streams of commuters along Strand Road – is retained and its proximity to the Mall and views over Dublin Bay are exploited.

The Mall, an existing green space, is opened up and paved to provide a civic amenity which is sheltered from the sea and focused on the sublime view of Irelands Eye. This space acts as a forecourt to the Library / Public Government Office and along with the park outside the Church, brackets the centre of Baldoyle giving it presence within the suburban sprawl.

Practical considerations of a blank first floor to avoid overlooking, a compact form to avoid overshadowing and a substantial circulation content informed the concept of a manipulated tube which is folded and bent around the existing Library building. This produces a form, which signals the public nature of the building by its singularity rather than through excessive scale.

The new construction, which is largely circulation, giving open public access to all areas, forms a loop, which begins and ends with Irelands Eye. The open ends of the tube are focused on The Mall – allowing direct access from the public space rather than the busy road – and the view to Irelands Eye, which forms a backdrop to public meetings in the large room at first floor level.

The prestige of the Local Authority is re-enforced by a stone cladding to the outside of the tube, which is a robust re-enforced concrete structure. The detailing of the cladding allows a clear reading of it as a thin skin wrapped around the concrete form. All of the new spaces internally are characterised by the presence of the concrete floor, walls and ceiling of the tube. The subdivision into functional spaces and provision of services is resolved by the insertion of a piece of timber origami. A folded plane of timber boards whose horizontality on the ground floor draws the visitor in before turning onto the ceiling and wrapping around the space at first floor where it enfolds the body of the public meeting room. This move re-enforces the clarity of the concept by keeping the concrete clear of services and allowing it to define the tube without the need to meet other practical considerations.