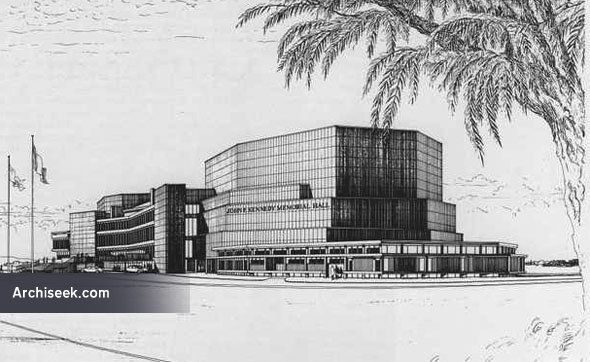 The John F. Kennedy Memorial Hall was intended to be a purpose built concert hall for Dublin. Originally suggested by the Arts Council, the project was initially discussed in April 1964. Several sites were considered including St. Anne’s Park in Clontarf before the site of Beggar’s Bush Barracks was selected. It had the advantage of being already in government ownership. The architect was Raymond McGrath, then lead architect of the Office of Public Works.

The building was to contain: one large hall with seating for 2,000 people, and a smaller auditorium seating 500. At one stage, it was also though to build a new National Library and a tower block containing government departments on the site also. The original plans were published in March 1965 with further design updates in February 1966. Tender drawing stage was reached by January 1970. By the following year, some opponents of the scheme were proposing it be moved to the Phoenix Park, and ultimately it was dropped completed by 1974. Partly this was due to undermining work by architect Michael Scott who felt that the commission should have gone to his firm. This was probably the greatest disappointment of McGrath’s career – a project that had several year’s worth of work put into it, only for it to be dropped in large part due to politics. Eventually the buildings at UCD on Earlsfort Terrace containing the Great Hall of the 1865 Dublin Exhibition were converted to accommodate the National Concert Hall.