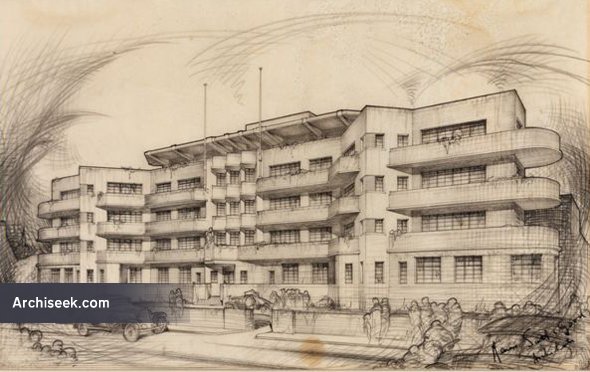 Unbuilt design for St. Ultan’s Hospital on Charlemont Street, Dublin. In the Ireland of the 1930s, there was a keen interest in architecture from the Government ministers of the new state and they were often present at meetings of the Architectural Association of Ireland. The Irish Hospitals Committee had started the Hospital’s Sweepstakes, a lottery in order to raise funds to fund the modernisation of the State’s hospitals and as a result many hospitals were being constructed or extended. All of the new hospitals built in the 1930s were modern in style and the main beneficiaries of work were Vincent Kelly who was on the Sweepstakes Committee, T.J. Cullen (1880-1947), and Scott and Good, who rapidly gained reputations for designing hospitals and received one commission after another.