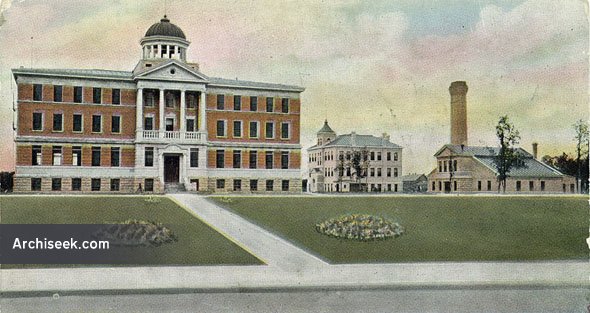 Following the establishment of the Manitoba Agricultural College in 1903-04, two river lots south of the Assiniboine River and west of Winnipeg were selected. The college officially opened in 1906, offering courses in crop and livestock production, farm management and home economics, only the third school of its kind in Canada. As the province was unable to secure additional property close to the school property, they elected to purchase 243 hectares in Fort Garry. In time, all university facilities and affiliated colleges from central Winnipeg relocated to the Fort Garry campus (now University of Manitoba). The Agricultural school was taken over by the Manitoba School for the Deaf in 1914. The buildings were later taken over by the government for a convalescent and rehabilitation center for World War I veterans. Eventually the college was converted into the army’s main area base, renamed Fort Osborne Barracks and remained in use until the 1960s. Today, the site is the home of the to the Asper School of Business.