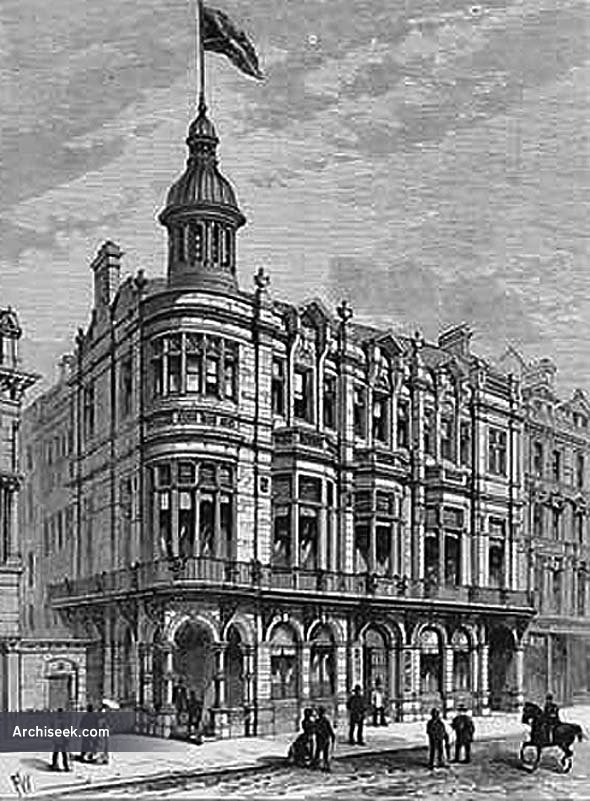 In 1880, a a group of Ulster Liberals debated whether the cause of the Liberal Party should be advanced by formation of a Club in Belfast similar to the Reform Club in Manchester. After coming to the conclusion that it would, and a suitable site on Royal Avenue was acquired, a design was put out to competition and the successful firm was Maxwell & Tuke of Manchester. The construction contract went to Mr James Henry of Crumlin Road, Belfast, at an estimated cost of £12,000. The building has a fine interior with a spectacular billards hall with a high wooden ceiling (now a function room). 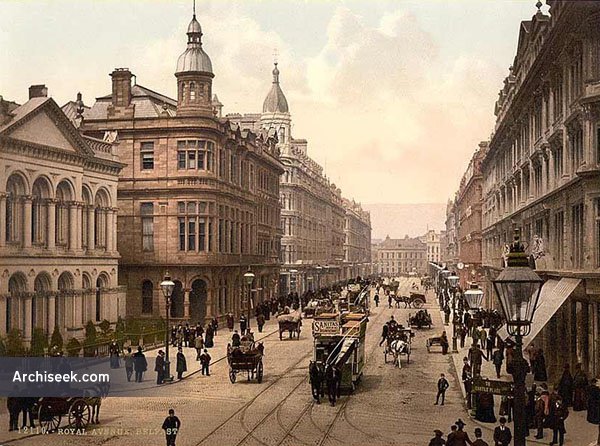 Although formed as a Liberal Club, within a few years the Club’s political complexion had changed to that of Liberal Unionism in reaction to Gladstone’s espousal of Irish Home Rule. For decades the Club had a political committee strongly influential in the Ulster Unionist Party but it was not until 1964 that remaining references in the Club Rules to Liberal-Unionism were changed to simply Unionism. By that stage in any case politics were playing a much less significant part in the life of the Club which had become primarily a social centre in the city for business and professional people.

“This new addition to Royal Avenue will occupy a vacant space next the Provincial Bank, and the frontage of the building will be in the line of the new buildings on the west of the street, so that the south corner of the club-house will project about 21 ft. beyond the line of the bank front, affording a good opportunity for architectural effect, an enabling the members of the club to over look a large portion of Donegall-place, Castle-place, and Royal Avenue. The entrance to the club-house is to be at this corner, and will take the form of an open stone porch or lounge, with granite pillars, and a stone balustrade facing east and south.

The front door will open into a spacious vestibule, which will communicate with the hall and staircase, 33 ft. by 20 ft. On the principal floor will be provided a diningroom, 46 ft. by 43 ft., with a small minstrels’ gallery or balcony at one end. This room will be 21 ft. high, and well lighted, having, besides other windows, two large bay-windows, commanding a view of the whole of Royal Avenue. The ceiling will be panelled in wood. The fireplace will be deeply embayed in the wall of an alcove, separated from the main body of the room by enriched pillars. The morning room will also be approached directly from the main landing, and will be 34 ft. by 27 ft., well lighted with tall windows to the south, a bay-window to the avenue, and a large bay-window over the porch. A door of communication will enable this room to be used in con junction with the dining-room on special occasions. In addition to these rooms, there will be on this floor a strangers’ room and two large and well-lighted rooms for private dining or drawing rooms. As the dining and morning rooms are lofty, it has been found possible to interpose a mezzanine floor between a portion of the first and second floors, and the rooms thus gained are a committee-room, a library, 26 ft. by 19 ft. 6 in., and a smoke-room, 38 ft. by 19 ft.

The only club rooms in the second floor are the billiard-room, 70 ft. by 30 ft., and a cardroom. The former occupies the whole of the front of the building, and, besides the light obtained from continuous windows in the roof, has a series of windows facing the Royal Avenue and the south. The service arrangements are very ample and complete. The kitchens occupy the whole of the third floor, and are entirely isolated from the rest of the building, excepting by the service-stairs and the various hoists. The chief kitchen is 38 ft. by 19 ft., and besides this there are a spacious scullery and a vegetable kitchen, and ample larder and pantry accommodation. The whole of the ground-floor, with the exception of the hall, staircase, &c., already enumerated, will be available for letting. The material for the fronts is to be red Dumfries stone, with a little granite about the principal doorways. The internal fittings will be chiefly of pitch pine; the ceiling in nearly all the club-rooms will be framed in this material, and relieved with white Onegawood, and varnished. The cost of the building is estimated at £12,000. The chief contract has been taken by Mr. James Henry, of Crumlin-road, Belfast.”