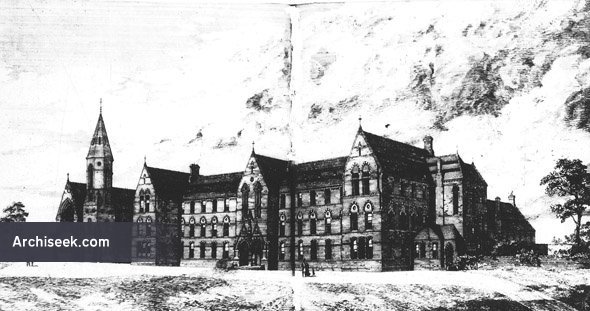 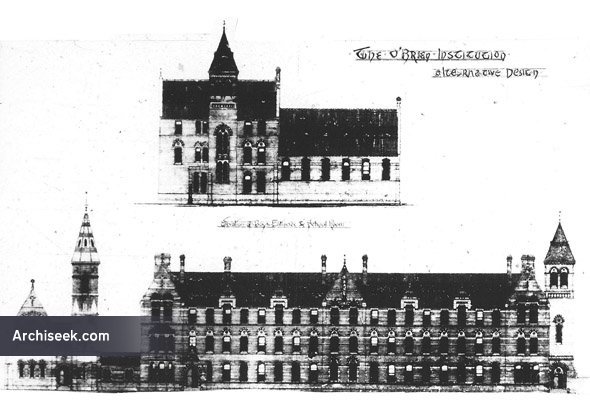 Now known as the O’Brien Institute, this building was to serve as an orphan home and school, financed by a trust that was founded by Bridget O’Brien in 1876. After an architecture competition, the architect hired was J.J. O’Callaghan, who submitted two designs, both illustrated. The building was commenced in 1880. Three years later, in August 1883 the works were nearly finished.

“The accommodation provides, according to the instructions, for one hundred boys as also for a community, with class rooms, study, hall, refectory, dormitories, and the necessary offices. On the ground floor are placed in the wing next the chapel the apartments for the community, with separate refectory and library, direct communication being given to chapel by connecting corridor. In the front are situated the students’ library, study, hall, parlors, and philosophy hall. In the centre block at rere, the refectory, kitchen and stores are conveniently placed. The study hall is placed at the opposite side to the community wing, ample light being obtained at three sides. The students’ entrance and staircase also is at this end near the proposed play-ground. On the first floor two dormitories in immediate communication with lavatories, and a spacious prayer hall is placed in the central gable between the two. The community bedrooms are placed in the wing next chapel; on this floor the servants’ rooms being kept in the rere over stores. On the second floor two more dormitories with lavatories complete the necessary accommodation to the students. The infirmary is completely isolated, with separate stair case, nurses’ room, sitting room, and pantry kitchen. The building, close to the Temple, is so placed that the chapel occupies a prominent position; the materials are red brick with granite dressings.” 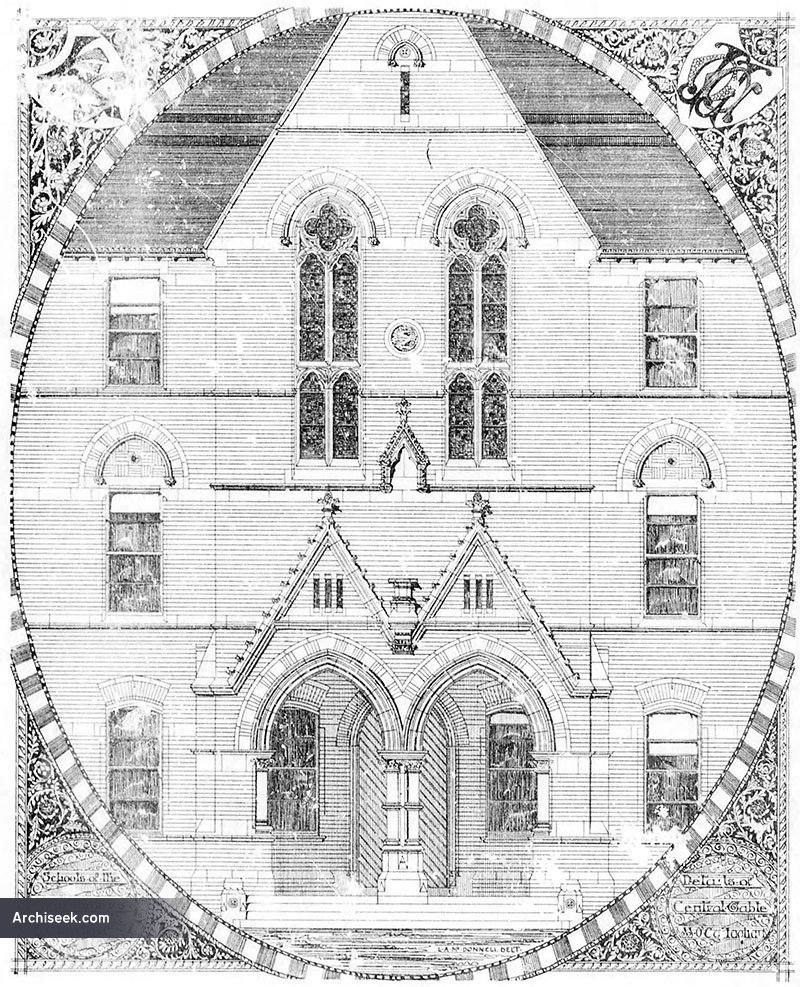 The Irish builder described the chapel: “The chapel consists of chancel, choir, seculars’ chapel, sacristy, and belfry. A large organ gallery is situated at the west end [Note: in fact it is the south-east – end], and is approached by circular stairs, making a bold feature in connection with the west [south-east] gable. The chapel is connected with the main building by a cloister corridor about 30ft in length. The belfry is situated at the north-west end [in fact south-west], and forms a porch to secular chapel, and is surmounted by an octagon spire, which, like the rest of the building, is built in brick. The dressings generally are in Drogheda limestone, while the walls throughout are built of brick from Kingscourt, Co. Cavan. The roof is open timbered to the curved ribs, and is paneled; the windows are glazed in lead lights. The woodwork is painted two shades, plain colour.” Today the buildings are used as Training centre for the Dublin Fire Brigade.