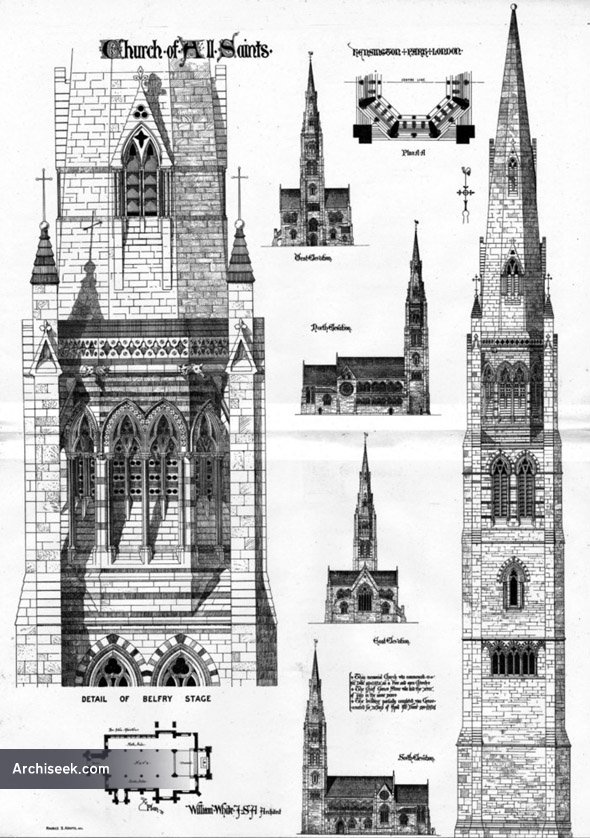 Elevations, Detail of Belfry Stage & Plan from The Building News, September 15th 1876. Construction on All Saints church was originally begun in the mid 19th century by the Reverend Dr Samuel Walker, following designs by architect William White, working with Sir George Gilbert Scott. The church was to be the centerpiece of the development now known as Colville and Powis Squares. Walker was deeply religious and his vision was for a “free and open church” which would be a spiritual centre for the newly built neighbourhood. Unfortunately, he experienced severe financial difficulties and was eventually declared bankrupt. The building was left unfinished for several years, lacking a spire, and remaining unfurnished, during which time it became known as All-Sinners-in-the-Mud. It was eventually completed in 1861, by The Rev. John Light of Trinity College Dublin, at a cost of £25,000. The spire envisioned in White’s original designs was never completed. The tower is 100 feet high and is said to resemble the medieval Belfry of Bruges, Belgium.

The church suffered from severe bomb damage in World War II during The Blitz, along with neighbouring buildings such as Pinehurst Court, at 1-9 Colville Gardens. The first bombs fell on September 26, 1940, and the church was hit again in March and June 1944. The Lady chapel and the south transept chapel were destroyed. Restoration work was eventually completed in 1951.