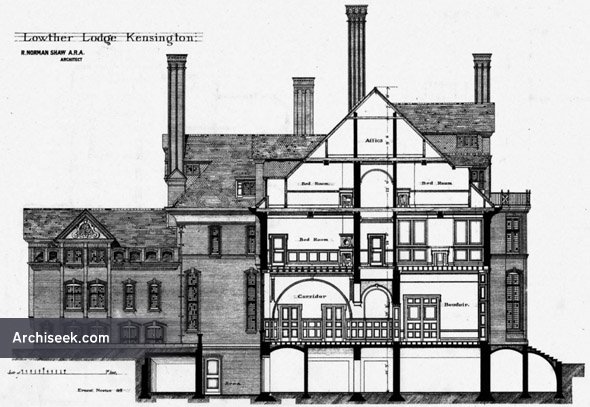 Lowther Lodge is immediately south of Hyde Park, and was built between 1872 and 1875. It is an important example of Victorian Queen Anne architecture, with gothic influences. The client was William Lowther, an MP who was a nephew of the Earl of Lonsdale, the head of the Lowther landowning family of Westmorland and Cumberland. The house was sold to the Royal Geographical Society, which converted it into its headquarters, commissioning extensions from G. L. Kennedy and F. B. Nightingale in 1928 to 1930, which included the Society’s lecture theatre. A further extension, including a new exhibition space, reading room and storage area for the Society’s collections, was completed in 2004. The building is also notable for having one of the first passenger lifts in a private house. Illustrations published in The Building News, June 25th 1875.