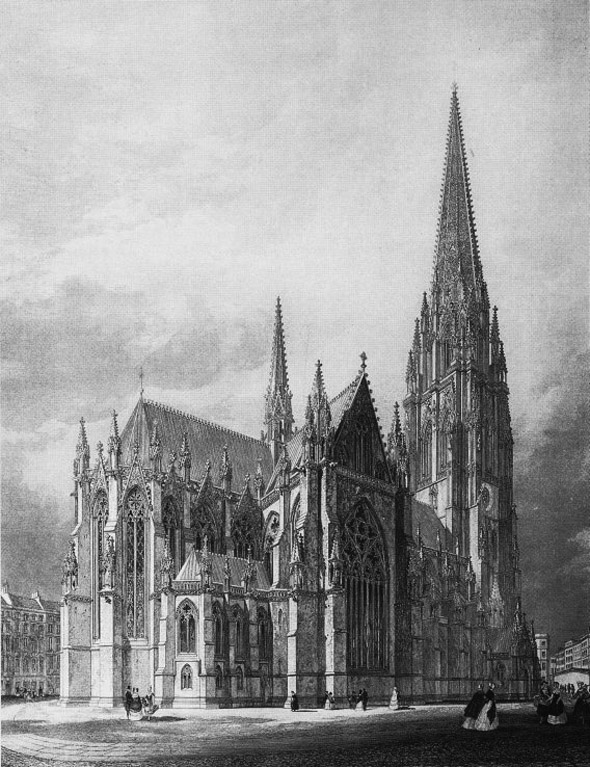 Constructed 1845-8), bombed during World War II and now a ruin. The church was the tallest building in the world from 1874 to 1876 and is still the second-tallest building in Hamburg. After the previous church had been lost in the Great Fire of 1842, it was decided to built a new church on then old site. In 1844 there was an architectural competition, won by the architect Gottfried Semper with a classical Roman domed structure. His design, however, was not realized, as it did not fit into Hamburg’s townscape and a Gothic revival was underway in Germany.

The English architect George Gilbert Scott, who was an expert for the restoration of medieval churches and an advocate of the gothic architectural style, was commissioned to devise a new design. He designed an 86 meter-long nave, with a 28 meter-high vault. The architecture was strongly influenced by French and English gothic styles, though the pointed spire is typically German.

Construction started in 1846, and on 27 September 1863 the church was consecrated. The 147.3 meter-high spire was finished in 1874. At that time, the Church of St. Nicholas was the highest building in the world until the completion of the cathedral of Rouen in 1876.

The clearly visible spire of the Church of St. Nicholas served as a goal and orientation marker for the pilots of the Allied Air Forces during the extensive air raids on Hamburg. On 28 July 1943 the church was heavily damaged by aerial bombs. The roof collapsed and the interior of the nave suffered heavy damage. The basic structure of the gothic church remained intact to a large extent and reconstruction was a realistic option. Nevertheless, it was decided to demolish the nave while leaving the spire untouched. In 1951 the nave was finally demolished and the rubble was partially used for the reinforcement of the banks of the river Elbe.

The spire and some remains of the wall were preserved as a memorial against the war. They were not cared for several decades, and, consequently, they gradually decayed. In 1987 the Rettet die Nikolaikirche e.V. foundation began to restore the existing fabric of the building and erected a so-called “place of encounters” (a room for events and exhibitions) in the crypt. A reconstruction of the church, as it was done with the Church of Our Lady in Dresden, is not intended. However, a 51-bell carillon was installed in 1993 as a memorial. Since September 2005, an elevator has taken visitors to a 75.3 metre-high platform inside the spire.