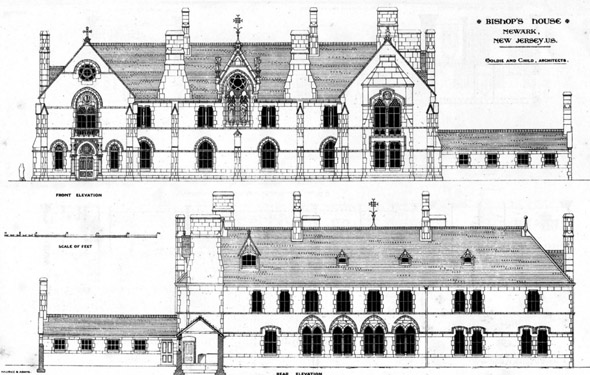 Published in The Building News, June 30th 1873. The idea of a new Cathedral church in the city of Newark was first proposed in 1859 by the then bishop, Bishop Bayley. In April, 1870, Jeremiah O’Rourke, the architect who would ultimately be selected as the Cathedral’s first architect, traveled to Germany, France and England at Bishop Bayley’s request, to gather ideas for Newark’s proposed Diocesan Church. After studying several cathedrals in England and on the continent, Mr. O’Rourke met in London with George Goldie, one of the leading proponents of the neo-gothic revival. Several meetings between the two men resulted in the sketching of plans for a church much smaller than the present Cathedral. No know record of the original O’Rourke/Goldie proposal exists, but we do know that O’Rourke ultimately abandoned them in favor of a much more comprehensive plan adopted in 1897.