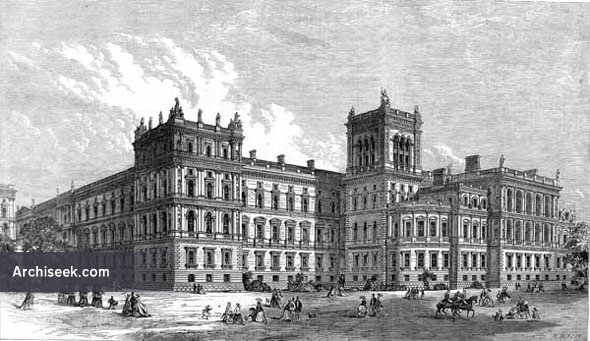 The Foreign and Commonwealth Office building originally provided premises for four separate government departments: the Foreign Office, the India Office, the Colonial Office, and the Home Office. Construction on the building began in 1861 and finished in 1868, and it was designed by the architect George Gilbert Scott in an Italianate style; Scott had initially envisaged a Gothic design, but the then Prime Minister Lord Palmerston insisted on a classical style. English sculptors Henry Hugh Armstead and John Birnie Philip produced a number of allegorical figures (‘Art’, ‘Law’, ‘Commerce’, etc.) for the exterior.

This illustration of the “Foreign and India Offices” was published by the Illustrated London News in 1866. Those two departments occupied this end of the building (the western or park side) while the Home and Colonial Offices occupied the eastern or Whitehall side. The whole edifice is now used by the Foreign and Commonwealth Office. The street along the left hand side of the building is Downing Street. 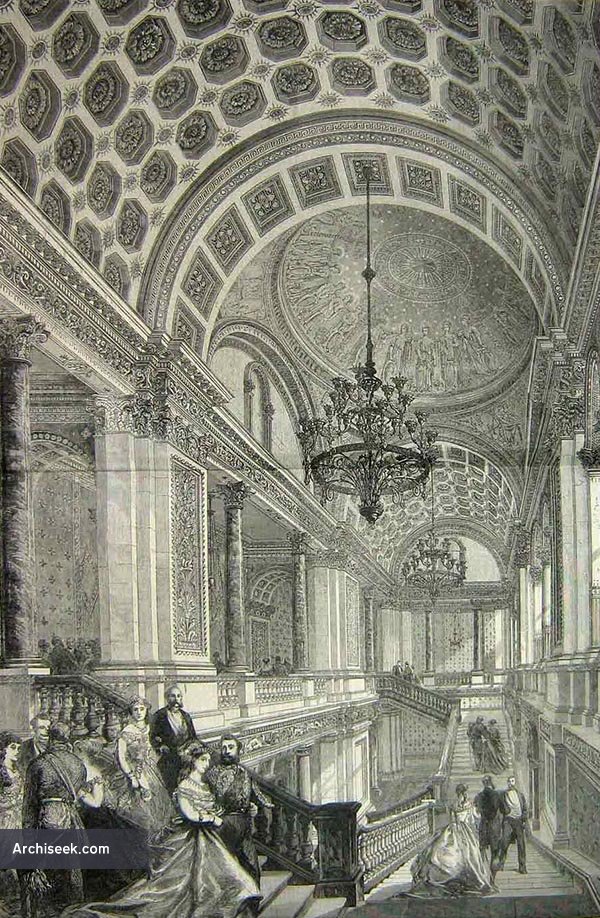 Due to increasing numbers of staff, the offices became increasingly cramped and much of the fine Victorian interior was covered over. In the 1960s, demolition was proposed, as part of major redevelopment plan for the area drawn up by architect Sir Leslie Martin. A subsequent public outcry prevented these proposals from ever being implemented. Instead, the Foreign Office became a Grade 1 listed building in 1970. In 1978, the Home office moved to a new building, easing overcrowding. It underwent a 17-year, £100 million restoration process, completed in 1997.