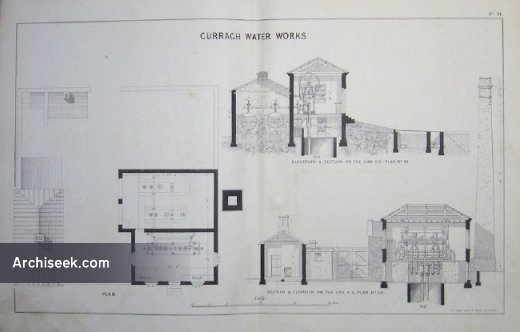 These drawings are from the Narrative of Operations in the Arrangement and Formation of A Camp for 10,000 Infantry on the Curragh of Kildare. By the Late Lieut.-Colonel H.W.Lugard. They were printed in Dublin in 1858 by Alex Thom & Sons. The volume was prepared at the behest of George Leach, who was completing the garrison construction work started by Colonel Lugard who had been instructed to construct a camp on the Curragh of Kildare. Lugard was killed in November 1857 in Hong Kong, a year before publication of these plans, while making preparations and arrangements for the attack on Canton. The plans were posthumously put together by George A. Leach, Capt. R.E., at the Ordnance Survey Office, Dublin.

In 1879 the first of the “modern” barracks (Beresford Barracks) was built at the camp, and six new barracks were subsequently constructed through the turn of the century. The names of the barracks that were built by the British Army were Ponsonby, Stewart, A.S.C, Engineer, Gough and Keane Barracks.

After the Irish War of Independence, the British Army handed over the Curragh Camp to the Irish Free State Army. The handover took place at 10 o’clock on Tuesday, May 16, 1922 when the camp was handed over to a party of Irish troops commanded by Lt Gen O’Connell. On Monday evening the Union Flag was lowered for the last time. By tradition the British army had cut down the flagpole requiring the Irish officers to physically hold the Flagpole while the Tricolour was raised on the next morning.