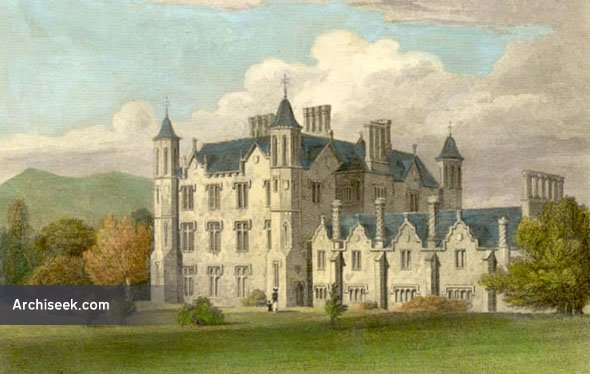 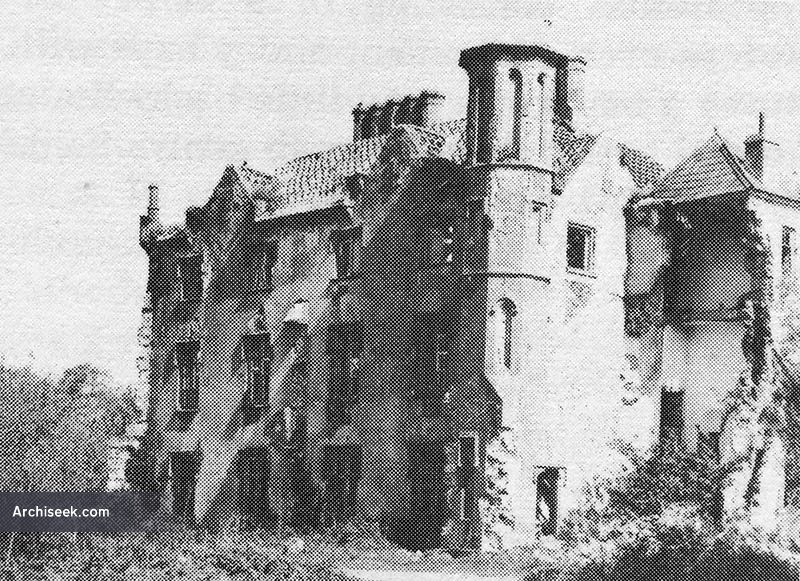 Also known as Milltown House. More or less abandoned from 1800 to 1818, the house was renovated under the second Baronet, Sir John Godfrey, according to ambitious plans drawn up by architect William Vitruvius Morrison. However the general economic decline of the 1820’s and family misfortunes meant that only the stables and service wing, with its flemish gables, were completed as planned. Later, in the early 1840’s, the third Baronet Sir William Duncan Godfrey further modified the main block of the house, adding an attic storey, a turret, and assorted gables, pinnacles and buttresses. The family abandoned the house in 1958 due to severe dry rot and it was demolished in 1977.

From; J.P. Neale, Views of the seats of Noblemen and Gentlemen in England, Wales, Scotland, and Ireland, vol.III, London, 1823
“This Mansion is one of many instances in the Kingdom of Ireland where the taste of Messrs. R. and W. Morrison has been applied to with success. Miltown House was erected about the year 1800 ; it was then a plain square edifice, and originally presented no pretension to architectural character. But Sir John Godfrey, having determined on some improvement, applied about two years since , to that very able architect, Mr. W. Morrison, who furnished the whole of the designs, and super intended the erection of the ornamental additions to the Building ; giving the whole the effect of a mansion of the early part of the Reign of Queen Elizabeth, an era highly interesting to the admirers of domestic architecture. The interior is also completed in a corresponding style. The Hall, communicating by open arches with the grand Staircase, is raised to the height of two stories, and is crossed by an Oak Gallery leading to the principal Apartments on the upper floor ; these are hand some and well arranged .

The House stands in a beautiful situation on Castlemain Harbour, a salt -water lake at the extremity of Dingle Bay ; one of those deep ingulphs of the sea by which the Southern coast of Ireland is so generally indented. The demesne is richly wooded with full grown timber, chiefly oak, chesnut, and beech ; the woods extend in deep masses far along the shores of the bay, on the opposite side of which the lofty and majestic mountains of Sheve Meech rise abruptly from the water’s edge.”