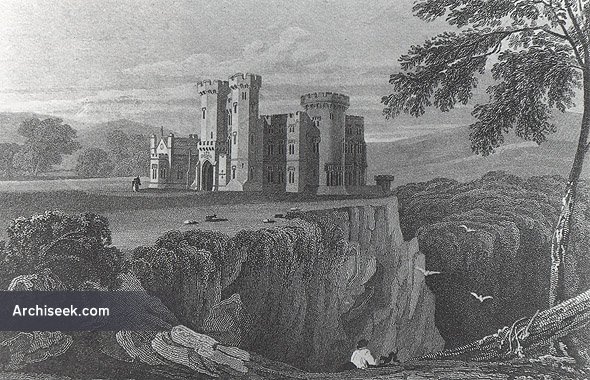 Largely unbuilt scheme for a client who died shortly after the design was commissioned. Although a house was actually built, it was to a more reduced scale and ambition – albeit with some details recognisably from this design. For many years a convent. The image by J.P. Neale, of the design as intended, over-dramatized the location – like many of his other images of Irish country houses and castles.

“Castle Richard is situated at the distance of about four miles from the ancient town of Lismore, and the Castle stands immediately over the River on a very steep bank ; it consisted originally of a single square Tower, from which the Battlements had been displaced to admit its being covered with a very unsightly Roof of modem construction ; and to this Tower Buildings have, from time to time, been added, without any regard to Architectural propriety, or any attempt to pre serve the castellated style ;—the late Mr. Gumbleton, however, on his coming of age, determined to make such additions and improve ments as would render the Castle worthy of the situation in which it was placed ; for which purpose he procured plans from Mr. Mor rison, of Walcot, and considerable progress was made in the Build ing, until interrupted by the proprietor’s death.”