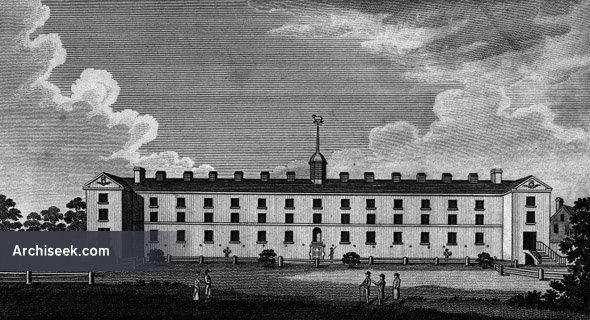 The Tenter House was erected in 1815 on the land between Cork Street, Brickfield Lane, Brown Street and Ormond Street, financed by Thomas Pleasants. Before this the poor weavers of the Liberties had either to suspend work in rainy weather. The Tenter House was constructed of brick, and was 275 feet long, 3 stories high, and with a central cupola. It had a form of central heating powered by four furnaces, and provided a place for weavers to stretch their material in bad weather.

The success of Dublin poplin was disastrous for the English cotton and woolen industries. The English Government issued new rules (no material may come to Ireland without first coming through England) and new taxes. This eventually caused the weaving industry in Dublin to decline. The decline of the weaving trade meant that the Tenter House was vacant. In 1861 a Carmelite priest bought the house and opened it as a refuge for the homeless. He ran the hostel for ten years until 1871 when the Sisters of Mercy came to Cork Street and took over the property.

South view of the Stove Tenter House in the Earl of Meath’s Liberty, Dublin. Published in 1818.