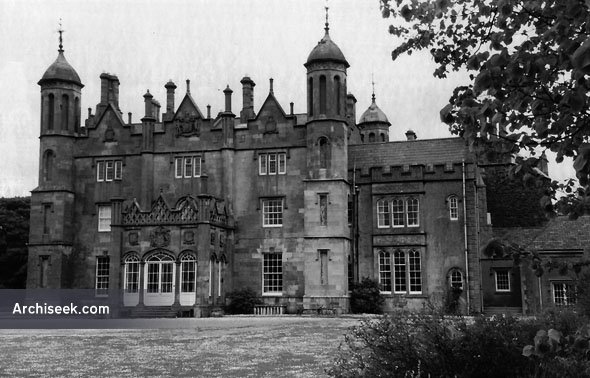 There has been a castle at Glenarm since the 13th century, and it is at the heart of one of Northern Ireland’s oldest estates. The present castle dates largely from 1756 although work has been carried out by most generations of the Antrim family.

In 1750 the fifth Earl of Antrim moved to Glenarm, a Jacobean mansion from around 1636. Christopher Myers, an English engineer, was employed on renovating the castle. Myers transformed the ruin into a Palladian mansion. The main front had an eccentric appearance, for its entire fenestration consisted of three-light Venetian windows, with curved colonnades ending in pavilions with pyramid shaped roofs on either side. 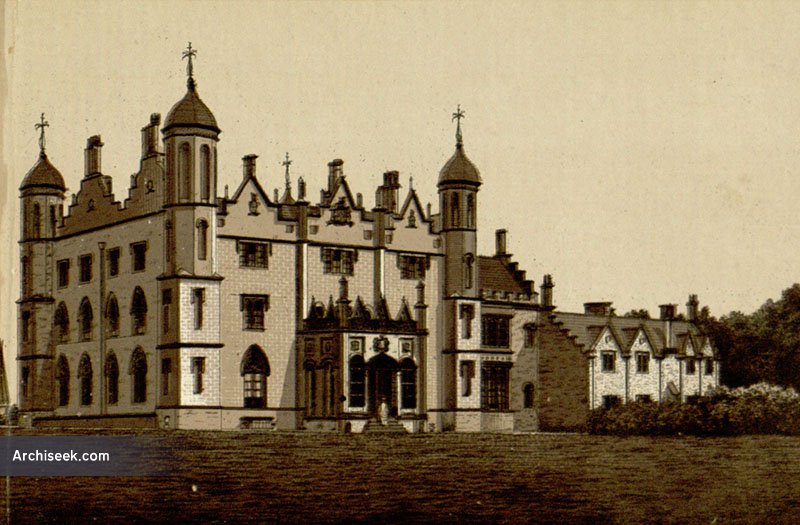 “Anne Catherine McDonnell, Countess of Antrim in her own right, wanted a fashionably romantic seat, and her architects were the Irish brothers William and John Morrison. Their plans, exhibited at the Royal Academy in 1824, were not very original, for they had already ‘Jacobethanised’ Miltown House in Kerry with almost identical towers, crenellations, side wing and porch to Glenarm. The ‘Barbican’ gateway was also based on one at another house. This gateway, the revamped servants’ wing and four comer turrets were quickly built, but then money ran out, and the castle kept much of its Palladian features until the 1850s, when the ‘Wee Earl’, Anne Catherine’s nephew, completed the Morrisons’ plans”. Glenarmcastle.com

From: J.P. Neale, Views of the seats of Noblemen and Gentlemen in England, Wales, Scotland, and Ireland, Second Series, vol.II, London, 1825
“This noble edifice stands on the sea -shore, near the Bay of the same name, in a situation remarkable for its natural beauties. In Plate I. is represented the principal entrance to the Castle, over a bridge, which formerly led to the Town of Glenarm , a new bridge, seen in the distance in our View, has been erected under the direction of the present proprietors, nearer to the sea, with a better access to the town ; and, by the skill of W. Morrison , the architect, a grand and imposing effect has been given to the Mansion by the erection of a gateway, corresponding in appearancewith the remains of the ancient Castle. The general view of this noble building is given in Plate II. in which the opposite side of the entrance Gateway and old Bridge is seen ; under is a Fall of Water.

The Castle here presents a most noble appearance ; its curious Towers and gable, rising behind the walls which enclose it. The Mansion has been lately rebuilt by William Morrison, Esq. It has been in the pos session of the noble family of M’Donnell for some centuries. A Monas tery also was built at Glenarm in the year 1465 , by Robert Bisset, a na tive of Scotland, which, together with the lands belonging there unto, were granted to Alexander M’Donnell, an ancestor of its present owner .”