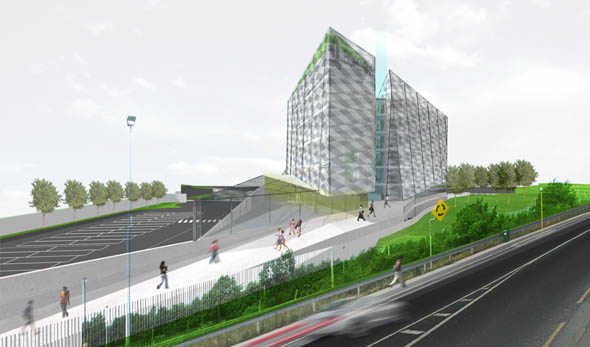 The building has been conceived as a series of interconnected spaces that define a new spirit for Bord Gais. The complexities of the brief have been considered in their entirety to provide an overlapping schedule of accommodation that realise the ambition of the Client brief. The result describes a new Headquarters building for Bord Gais that can change and expand to meet the oscillating requirements of the Client.

Given the size and complexity of the brief, we have sought to develop a series of program strands or “seams” that wrap the various spaces of the building together in a unified way, while at the same time, concerning ourselves with providing individual spaces with character and clear identity.

Technically, the building will perform to the highest energy and sustainability standards; merging a web of architectural spaces with building elements that advance current building performance criteria through their inherent character and qualities. In this way, we consider that the building will become a distinguished addition in its setting, whilst establishing a clear statement of intent of how Bord Gais see themselves as a responsible provider of a future sustainable vision. The physical form of overlapping planes and interconnected spaces helps demonstrate how such a vision can be realised.

The building has been designed as to become a marker or “milestone” along the Northern Cross Route whilst also addressing the adjacent development site through appropriate scale and proximity. We are interested in being able to facilitate pedestrian connections between the new Bord Gais building and the adjacent buildings through the provision of an sloped ramp along the front (East) boundary of the site; in this way, the building addresses the immediate setting whilst at the same time allowing for physical screening to the car-parking and associated delivery facilities integral to the Client brief. By situating the building to the southern end of the site, an extension of the building line and physical edge is allowed along St Margaret’s Road whilst also creating residual space for future extensions to the building along the northern edge of the site when demand requires such.

The building is arranged on site to allow for ample parking, 185 spaces (required above ground) for staff and visitors, and 35 Bord Gais Networks Vans for 24-hour service of gas lines around the greater Dublin area. The building footprint on site also allows for further development above the car-parking area as stated in brief. Access is off the main road at the south of the site. We have specific requirements regarding artic delivery trucks along with 24-hour access for vans etc. See Site Plan for Layout.

The site is situated adjacent the M50 motorway (Northern Cross Route), creating a level of noise and pollution that would intrude on a working office environment. The positioning of the building to the southern end of the site and away from the Motorway, with the car park as a buffer will reduce noise invasion considerably. The slope at the north east of the site is to be planted with tall trees, which will create a greener vista to users of the building. We propose east perimeter of the site is planted so as to visually enhance the area around the building and also hide the car-park from the road running parallel. A steel deck is proposed to run at level 1 from the building over the car-park, partially covering some of this area. This deck is intended to hold solar panels and planting while also providing shelter to those walking to and from the car-park in inclement weather. This deck will also reduce the visual impact of such a large car-parking space from all levels above the plinth (level 2- 6 – all office levels).

Planting is again proposed to the south of the site perimeter to reduce visual impact of the loading areas and hard landscaping. The planting will also reduce solar gain directly from the south while also improving visual security around the site. Planting is aimed to be integrated & reduce the visual impact of a steel railing wrapping around the perimeter of the site.

Position of building on site:

The building is positioned towards the south of the site. This is in keeping with the existing density of developments in the area, knitting the site back to the shopping centre development. The objective is to develop the site towards the north with the possibility of another block being built over the carpark area linked via the deck at level 1.

The objective of the layout is to move vehicles easily and safely through the site whilst controlling access of all vehicles for necessary security reasons. A series of 12.5-metre turning circles are provided for the refuelling of vans on site. A single exit/entrance is provided with a security pavilion adjacent to this area. A one-way system operates for cars, vans & lorries throughout the site. The aim is to safely allow arctic deliver trucks & vans to leave and enter the site without being visually obstructed and without obstructing smaller vehicles from moving though the car-park, thus a complete separation between both functions and vehicle types.

The building is designed as a “plinth” over two levels (level 0 & level 1) with a series of interconnected offices and other facilities overhead arranged around a central vertical spine; the ‘plinth’ incorporates specific double height storage requirements. Most functional elements are integrated within the plinth to allow for efficient running of the operations section of BGN. The National Training School also sits within this area to facilitate its integration with the existing building, connect it to the primary functional areas of BGN & to allow external access after office hours.

At level 1, the main reception sits within the centre of the plinth. The restaurant/ canteen is situated just to the south of the reception. The next four levels consist of 2 blocks connected via an atrium space. Each block has a single core (including lifts/stairs/w.c & ducting). A structural Steel & glass lift vertically connects all lobbies at each level. The block arrangements are designed from first passive principles. Each block is not more than 13m wide for cross ventilation. Floor to ceiling heights will be no less than 3m high. Each office level has openable windows and is east west orientated to reduce solar gain in the workspaces.
Types of uses/ functionality:

The buildings functionality is reflected in its layout. Heavy duty functions are to the lower levels with open plan offices at higher levels for cross ventilation, noise reductions & natural lighting. The lower levels layouts are to facilitate ease of movement throughout the internal& external loading areas.

The entire building is designed to offer maximum flexibility while connecting each department at necessary points and locations. The second layer of the “plinth” (Level 1) functions as a means of tying the building together at a central point at the reception & restaurant areas. This also encourages an easily understood circulation system at the most public point of the building; the open configuration provides clues as to what goes on in the offices above, whilst at the same time providing a secure working environment at the entrance to the building. The restaurant and canteen facilities at the “prow” of the building to the south to provide a perfectly located position for all-day access to sunlight, and is positioned to create working “theatre” with the movements of people animating the façade to the St Margaret’s Road.