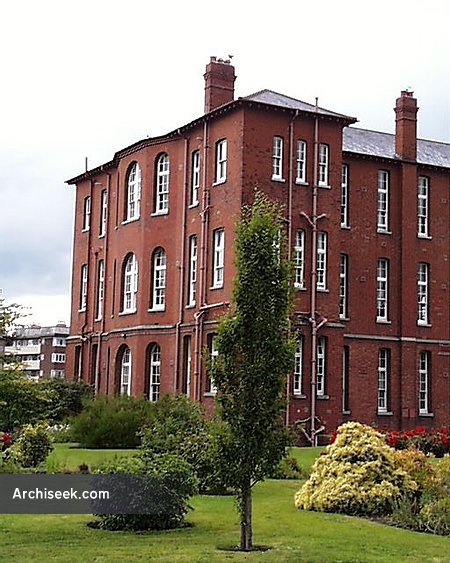 Founded as the George V Hospital and designed by the Royal Engineers of the British Army, St Brican’s is still in use as a military hospital by the Irish Army. Designed as two wings of wards (one of three storeys, the other of two), connected by corridor blocks and a central administration block, the hospital presents a stern, institutional appearance. The interiors of the hospital are quite old-fashioned medically and are undergoing renovation. An interesting feature is the tunnel which runs from here, via Arbour Hill Prison (formerly the military prison) to the former Collins Barracks.

The ward blocks have shallow bays on their ends where the dayrooms are located inside. Each of the wards has its own dayroom at the south facing end to make the best of the sunlight. Facing the main hospital is the block formerly used for contagious diseases isolation (below right), now offices.

To the rear of the hospital is sited the old operating theatres and various stories. The round headed windows of the corridor block can be seen quite clearly here. The interior of the hospital has been used in many movies including “My Left Foot”, due to its old-fashioned appearance. The wards are of the traditional long room format with individual dayrooms and bathroom facilities at the ends. Most of these are currently unused. The wards are connected to the main block by long corridors with round headed windows on each side.

The three storey block also has a ward for officers (above right) with four beds and a slightly higher level of luxury, with a fireplace and separate washing facilities. Next door is a room for a senior officer.