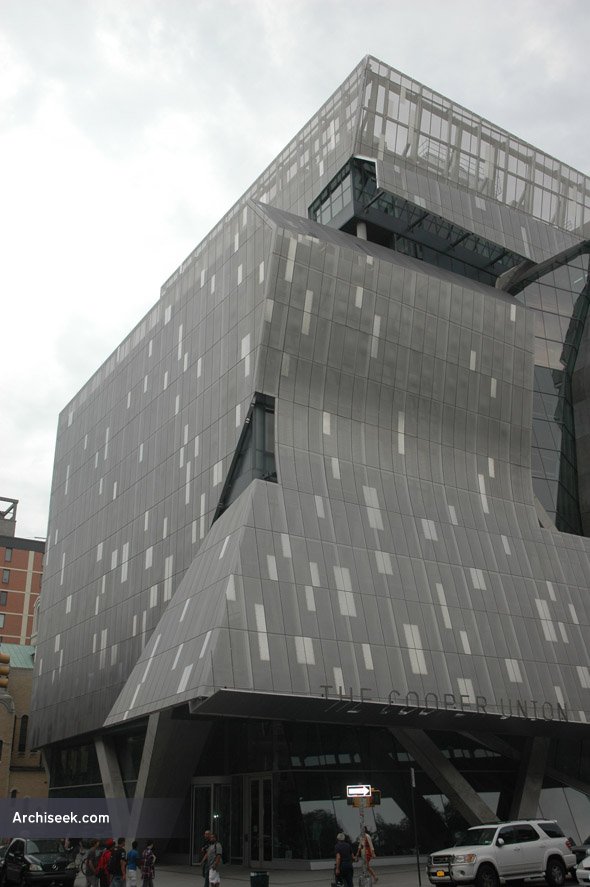 A new classroom, laboratory, and studio facility completed in summer 2009, replacing the aging Hewitt Academic Building at 41 Cooper Square. The so-named “New Academic Building” is of modern, environmentally “green” design, housing nine above-ground floors and two basements. The structure features unconventional architectural features, including a full-height Grand Atrium, prevalent interior windows, a four-story linear central staircase, and upper-level skyways, which reflect the design intention of inspiring, socially interactive space for students and faculty. In addition, the building’s design allows for up to 75% natural lighting, further reducing energy costs. Other “green” features in the design include servo-controlled external wall panels, which can be swiveled open or closed individually in order to regulate interior light and temperature, as well as motorized drapes on all exterior windows.

Primarily designed to house The Cooper Union’s School of Engineering and School of Art, the new building’s first eight above-ground floors are populated by classrooms, small engineering laboratories, study lounges, art studio space, and faculty offices. The ninth, top floor is dedicated completely to School of Art studio and classroom space in addition to the art studio spaces located throughout the building.

Internally, the building is conceived as a vehicle to foster collaboration and cross-disciplinary dialogue among the college’s three schools, previously housed in separate buildings. A vertical piazza””the central space for informal social, intellectual and creative exchange””forms the heart of the new academic building. An undulating lattice envelopes a 20-foot wide grand stair which ascends four stories from the ground level through the sky-lit central atrium, which itself reaches to the full height of the building. This vertical piazza is the social heart of the building, providing a place for impromptu and planned meetings, student gatherings, lectures, and for the intellectual debate that defines the academic environment.

From the double-high entry lobby, the grand stair ascends four stories to terminate in a glazed double-high student lounge overlooking the city. On the fifth through ninth floors, sky lobbies and meeting places””including a student lounge, seminar rooms, lockers, and seating areas overlooking the cityscape””are organized around the central atrium. Sky bridges span the atrium to create connections between these informal spaces. Further reinforcement of the strategy to create a vibrant intellectual space is provided by the “skip-stop” circulation strategy which allows for both increased physical activity and for more impromptu meeting opportunities. The primary skip-stop elevators, which make stops at the first, fifth and eighth floors, encourage occupants to use the grand stairs and sky bridges. Secondary elevators stop at each floor, both for ADA compliance and for the practical tasks of moving materials, artworks, and equipment.