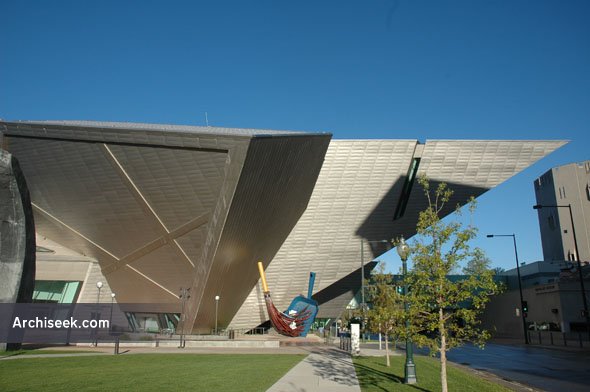 The Frederic C. Hamilton building, designed as a joint venture by Studio Daniel Libeskind and Denver firm Davis Partnership Architects. The new building opened on October 7, 2006, and is clad in titanium and glass. Since opening, the building has been plagued by roof leaks for three years. As of December 2009, the question of who will bear financial responsibility for the lengthy and extensive repair work has gone to arbitration.

The building is clearly designed to be seen from one direction, from close to the main entrance of Grave’s library – where the “prow” can be seen pointing to Ponti’s 1971 building. Where once Libeskind’s work seemed groundbreaking, the now over-reliance on the same architectural elements has reduced the theories and expressive facades of the Berlin Jewish Museum to a style to be used at will. “I was inspired by the light and the geology of the Rockies, but most of all by the wide-open faces of the people of Denver,” says Libeskind. Quite.