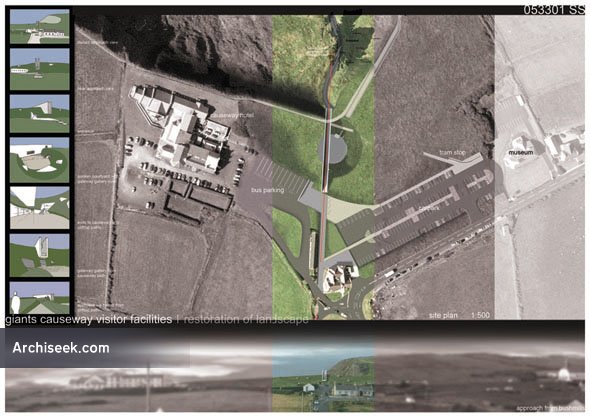 Continuity of the coast line is restored with excavated material & imported earth to reinstate the ridge currently broken by the siting of the existing visitors centre.

The building conceals itself within the reconstructed landscape with the exception of a simple “gateway gallery” structure. This is aligned on an axis with the view from the Bushmills approach, and the distant Fingal’s Cave in Scotland . The view along this axis is really the first view that visitors have of the site as they approach from inland. The structure creates a fissure like pass through the restored landscape.

The extension of the existing pathways, the tension between and the interplay of these with the new routes through to the causeway is central to this project;
a) The continuity of the cliff top pathway is restored over the reconstructed landscape and through the “gateway gallery” on a glass bridge.
b) The west path extends to a new landscaped space in front of the museum to draw visitors from the car park at the eastern side of the site.
c) The approach into the building from this direction aligns with this and dips into the concealed building firstly through a shallow crevice and then by tunneling under the restored path above.
d) Similarly the tram-line parallels this path and extends along the side of the car parks and museum ; this is a suggested form of transport; the tramway can accommodate emergency and maintenance vehicles .
e) The eastern cliff top path also offers an option to step down through the building to draw visitors from the western side of the car park and relocated coach parking.
f) The western cliff top path will also offer an alternative route which will gently ramp down within a crevice into the gateway gallery

The proposal reinterprets the primitive form of the circle in the Irish rath or fort to celebrate the convergence of old and new pathways, but inverts this form into a grass amphitheatre. Concealed within the landscape this will offer a welcoming sheltered space to punctuate the journey to and from the causeway and access the facilities. The space is intended to act as a meeting place , provide shelter from onshore winds, offer up picnic areas, a café terrace and a space for external events etc.

The surrounding landscape in effect will flow down into and undulate around this amphitheatre. Careful use of indigenous planting such as gorse will be used to prohibit access to any steeper parts of the slopes formed

The circle fragments into a spiral generated by 3 meeting points which it encompasses; namely Gateway Gallery & East path, Node point at meeting of East & West and the Gateway Gallery / West Path node

Starting underneath the gateway gallery, the main internal path follows the circular form within the interpretive centre before spiraling onto the east/west path node point, and then back onto the gateway gallery. An internal corridor serving the teaching/ admin areas continues along this path and returns to the Gateway Gallery immediately above the point where it began its journey.

The Gateway Gallery will be as an experience free to the visitor; while the structure acts as an implied gateway, an orientating device and a viewing point, it is also as wonderful canvas which can be engraved, embossed & projected upon to present both the geological and mythological history of the causeway .

One side (the educational side) could be given over to geological scientific interpretations while the opposite to the mythological and historical events relating to the site.

A hollow wall structure allows opportunity to conceal audio-visual equipment to project images and sounds to the visitor; (a mainly external experience) there is also scope to conceal retractable sail like awnings which will shelter visitors in wet weather

Light will be admitted to the building interior by forcing abstract formations up through the slope in glass or translucent marble sheets.

Along with the Gateway Gallery these will be the only parts of the building visible to the visitor from the main approaches or the causeway itself.

Some of these merely admit light, others will offer views of the sky, the amphitheatre, the wider landscape , connecting the building to the elemental forces of nature.

The Gateway Gallery will be formed in reinforced concrete with a white limestone aggregate which will be polished , and or sandblasted to give a soft white monolithic stone like finish, Further engraving, sculpting will depict Causeway history and geology

While the building is essentially a “non-building” concealed within the landscape it extends paths outward towards the Old School Museum, The Nook pub/restaurant and the Causeway hotel;

Car parking is reorganized to form public spaces adjacent to the museum, the pub/restaurant and the western entrance to the new complex. these are interconnected by an axial pathways that links to the eastern entrance and tram way platform.; greater interaction with these neighbouring assets and the spaces adjacent aims to encourage increased business for these facilities.

Coach parking is relocated to the hotel side and the existing vehicular approach becomes a pedestrian approach for car-borne visitors coach tourists, cyclists , hikers alike;

The existing single storey store framing the existing approach is retained and could act as parking for cyclists.

The building will be heated by geothermal power; ventilation will be admitted at low level through ground ducts and drawn through the buildings into the courtyard.