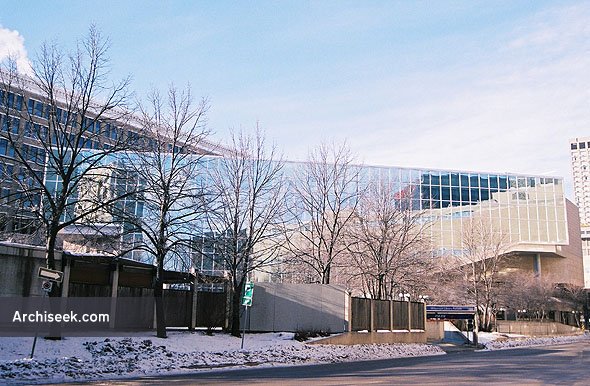 Opened in late 2005, the Millennium Library is a redevelopment of a library dating from the late 1970s. The older library was no longer able to meet the demands of a modern-day library. Instead of building a new downtown branch, it was decided to redesign and rebuild. The redesign combines 40,000 sq. ft. of new construction and a complete renovation of the existing structure into a 180,000 sq. ft. state-of-the-art facility.

Designed by Patkau Architects in association with local Winnipeg office LM Architectural Group, the new building features a large new glazed area with reading terraces. This is the buildings most prominent and elegant feature, the original building being quite clumsy in its proportions. The design of the original building can be best seen from Graham Avenue, where the distinction between the new top floor and the original is quite obvious. Sadly this contains the main entrance to the building, so that the new elegant addition can not be appreciated by people entering the building.

Internally, the building’s more prominent feature is the new reading terrace. This provide private yet visible spaces for people to read or research and cascade down the height of the building alongside the main stairs. Lifts have also been provided with a simple glass and stainless steel finish.

The budget was limited, and unfortunately it shows. The building’s redesign fails to address the elevated walkway system which edges around the building, while the entrance area has an unfinished and not very welcoming look about it. There was an opportunity here to run the walkway through the centre of the building in a creative way. The main entrance has become the recipient of some dodgy artwork instead of an architectural intervention. Other details like signage and fittings could have been better chosen. Generally the feeling that you get is that the budget was mainly spent on the reading terraces while other areas were finished to the bare minimum. This is disappointing as this could have been an iconic Winnipeg building as opposed to a fine reading terrace attached to an average library.

Patkau Architects was founded in 1978 and is based in Vancouver, British Columbia, Canada. There are currently three principals: John Patkau, Patricia Patkau and Michael Cunningham. Both John and Patricia were born in Winnipeg and educated at the University of Manitoba.