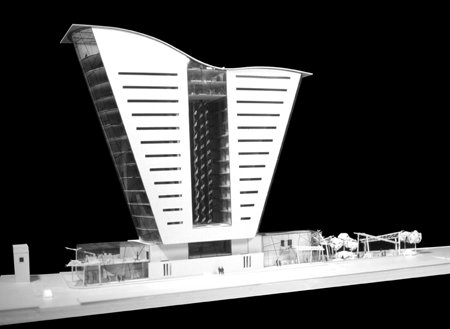 There are three things, said Vitruvius, that must be considered when designing a building, without which no building is worthy of praise: utility, perpetuity and beauty.
Utility: a form that responds to economic business requirements, that is capable of investing in the opportunities offered by a community. Dublin is a highly dynamic city that becomes, with any of its major works, an example. For its citizens it is a symbol – an example of pleasing form that evokes objects from its history, an example of sustainable, ecologically compatible architecture. Perpetuity: the use of traditional, durable materials (terracotta bricks, reinforced concrete) in a carefully judged balance with the lightness of the structural plate glass to give time a way of appropriating the work. Beauty: the presumption of a building to become familiar, to be viewed, even in the construction phase, as part of a harmoniously growing city that has a clear identity and is maintaining its symbolic genius loci.

While adhering to the rules, in our view this building possesses elements that enable the new to be adopted by the history of the country, whether it is the clear Celtic-harp form, or the materials that recall ancient buildings or the optimum use of the natural conditions – the strong west-east wind, the powerful current of the river towards the sea, the light of the Sun, so sparing yet so precious. The functional organization is simple: the platform for public activities, the residential tower, the office tower, the independently accessed music studio.

A light building that occupies the space in a characterful way, indicating the gateway to the sea with the optimism of someone who no longer needs to leave in search of fortune.

Besides its traditional architectural function, the form also has an energy-related one in that it has been devised as a system capable of interacting with the surrounding natural environment, from which it taps energy to enhance occupant comfort. The exterior walls have a dual skin and inner air cavity which provide optimum levels of thermal and acoustic insulation. The photovoltaic roof is capable of producing about 50,000 kWh of solar energy per year. The space between the two towers creates a current of air which, together with the natural, prevalently west-east wind, is used by three vertical-axis wind turbines, each about 30 m high, which can produce approximately 35,000 kWh of energy per year.