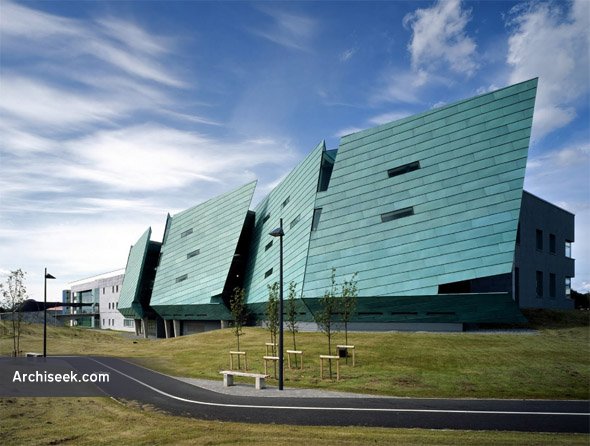 The main goal of the project was to create a new structure with a stronger identity and a more contemporary, functional architectural configuration. The new building is made up of three rectangular elements containing classrooms, offices and a library. The library building is built on two levels, connected by a staircase of lamellar wood. The old and new parts of the campus are linked by a jutting bridge leading to the main entrance, sheltered by a red stretched flexible structure.

Preference was given to use of local materials, including stone and, especially, copper covered with a patina, which covers the outer walls of the library as they fold to form three great sails. Where they come together views open up of the Galway coast. The three copper walls not only give the building great architectural character, but serve an important function in ventilating the library, for their shape and orientation facilitates the passage of air.

The complex rises on a hilly site which required adaptation of the form of the buildings to that of the land, so that the old and new buildings stand at different elevations.The building of greatest architectural interest is the one housing the library. Its perimeter is marked by the copper wall on one side, and made of clear glass on the other two. Its trapezoidal layout is a response to specific needs for lighting, facilitating the flow of light into the reading rooms. The roof is also made of glass, for the same reason.