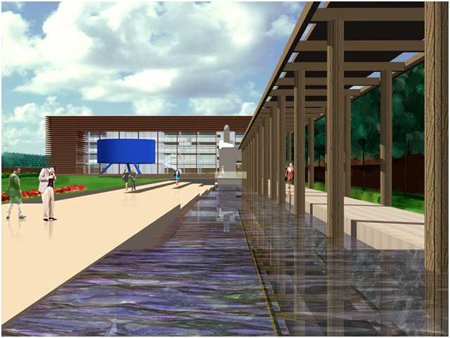 The design concept is essentially a landscape idea. The scheme treats the whole site as a park. The offices divide the park into two gardens – a ‘vehicle garden’ and a pedestrian (or civic) garden. The primary focus of the scheme is the large Civic Garden facing Limerick Road. The offices are a backdrop to the Civic Garden, opening onto it. Locating the building back from the road in the centre of the site enables the retained arch, lantern and adjoining wings to be incorporated into the Civic Garden as a ‘folly’. The retained structure forms the backdrop for an outdoor stage.

The north end of the Civic Garden facing Limerick Road comprises parallel planted strips of flowers and grasses, each a different colour. The public can walk between the planted strips, which to the south opens out onto a wider lawn. Separating the lawn from the covered walkway is a water feature consisting of ponds that step down from Limerick Road to the outdoor stage. The lowest semicircular pond separates the stage from an area of tiered seating.

The distributor access road running along the site’s eastern boundary is shielded from the Civic Garden by planting and has a number of parking spaces convenient for drop-off and short stay parking for those visiting the building.

The ‘Vehicle Garden’ to the south of the site comprises parking bays interspersed with a variety of vegetation. Paths link the parking bays and heliport with the central covered walkway, ensuring that drivers reach shelter as quickly as possible after leaving their vehicles.

The offices are clad in continuous suspended horizontal terracotta louvres. The space between the louvres is mostly glazed with a combination of fixed and opening panels. The deep louvres provide efficient sunshading and create a subtle diffusion of daylight into the interior of the offices. Internally the louvres provide cable trunking at desktop height around the perimeter of the building. At night the alternate bands of light and dark formed by the louvres creates a distinctive landmark.

Along the north side of the offices a four-storey public atrium has a glass façade facing the Civic Garden and Limerick Road. This Public Foyer is a generous well -lit space suitable for exhibitions as well as general entrance and reception functions. Public counters and interview rooms are located in and around the atrium. On the upper levels offices open onto the atrium at each level. The atrium is the principal circulation route within the building, thereby providing a sense of activity and togetherness. The Council Chamber on the first floor is a pebble-shaped double height space elevated within the atrium and protruding over the Civic Garden. It has no windows but is skylit through a glass block roof terrace overhead. As a modern ‘folly’ the Council Chamber carries the compositional themes of the Civic Garden into the atrium and office space.

A large open staircase rises from the ground floor reception to a mezzanine foyer serving the Council Chamber Open stairs lead to the upper levels of the atrium. Lifts to all levels, fire escape stairs, and w.c. facilities are located within the central cores at the rear of the atrium.

The narrow floor plate means that no workstation is more than 10 metres from external glazingand nearly all will be less than 7 metres. Narrow floors also facilitate cross-ventilation. The atrium is used for passive stack effect ventilation with hot air exhausted via glass ‘chimneys’ on the atrium roof.