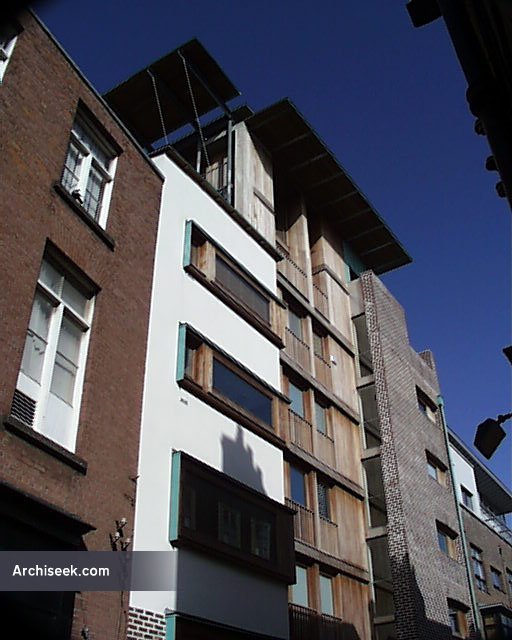 One of the new apartment developments in the western end of the Temple Bar Area, the tower by de Blacam & Meagher is a wonderfully clad building with brick and timber predominating. Originally it was designed to be higher but a couple of stories were removed at the behest of the planners. However its sit on a patch of sloping ground towards Lord Edward Street help make the building appear higher than it actually is. On a narrow street, the head has to crane upwards to see the top levels. An interior courtyard presents a different aspect to the building with a central portion being more expressed as a tower with the brickwork taking central stage.

The Wooden Building is constructed of wood, stone and glass, representing building materials that link the past with the present. Based upon Viking-period excavations, wooden post and wattle structures lying approximately 2 metres below modern ground level were located, and there is evidence of extensive use of wood as a building material in Dublin during this time. Temple Bar Properties would like to extend our most sincere congratulations to De Blacam and Meagher, and our thanks to the many people involved in this project, which as been a critical part of the regeneration of Temple Bar as a social, cultural, residential and business area.