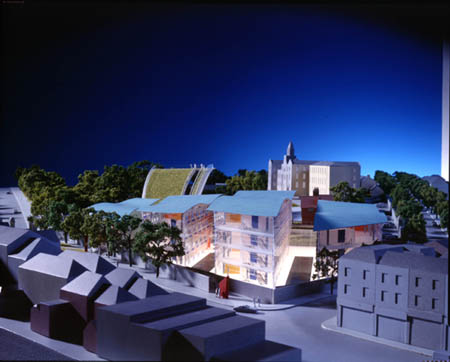 International competition winning design for a new headquarters for the Irish Government’s department of arts, heritage, gaeltacht (Irish speaking) and the Islands. The site was bounded by Infirmary Road and Conyngham Road – an area at the ‘tip’ of the city end of the Phoenix Park to the south of the Irish Army Headquarters.

The 15,000sq m office development was intended to fulfil a number of functions aside from housing civil servants and featured public facilities such as an exhibition hall, a library and a 250-seat auditorium.

According to the architects: The building attempts to ‘mediate between the urban and the park’ by creating a new point of entry from the city and by allowing park visitors to use part of its grounds. The building, while answering the pragmatic requirements of the brief, offers new possibilities for its users. This includes being able to walk onto the 25m high roof of the auditorium to take in views of the city and the surrounding hills. The roofs on the other buildings also adopt an undulating profile in an attempt to integrate the building’s roofscape with the hilly landscape around the capital.

The office accommodation is arranged in a series of three and four-storey ‘finger’ buildings which are clad with glass panels of different colour and translucency. These are separated by protected courtyard gardens and offer views of the historic ministry of defence building.

The new public pedestrian route which separates the public areas from office facilities increase the permeability of the site and creates a new route into the park.

Sustainable design was an important part of the brief and this building demonstrates a 50% saving in running costs against a conventional air-conditioned office building by being mostly naturally ventilated with a labyrinth for passive cooling.

The Office of Public Works in Dublin wanted a building to mark a modern direction for Irish culture.

After Reid Architecture won this competition, a change in the financial circumstances of the country meant that this project was never continued with. The site was used for a new Central Criminal Court.