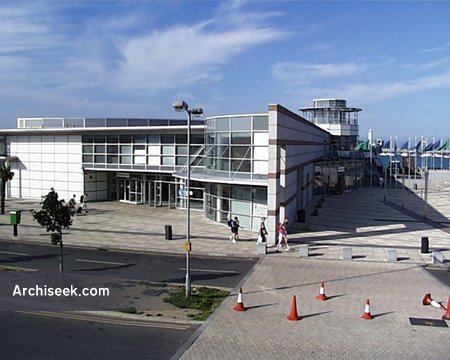 The ferry terminal at Dun Laoghaire is one of the main entry points into Ireland from the United Kingdom. After a prolonged period of discussion and the announcement by Stena Sealink that they intended to use a HSS on the Dun Laoghaire – Holyhead route, it was decided to rebuild the terminal. The new terminal is sited alongside the older Carlisle pier with its covered railway shed and was designed along airport lines to process passengers quickly and effortlessly.

Designed by Burke-Kennedy Doyle and Partners, the building is surrounded by a large landscaped plaza with seating, palm trees and a fountain and presents a narrow low street frontage. Vertical emphasis is by way of a glazed circular tower which rises from the centre of the building. The projecting stone wall is positioned to create a dialogue with both the old Town Hall and the former station buildings and helps to enclose the plaza. The building uses a nautical theme throughout – porthole windows and decking feature, as does large areas of glazing, brise-soleils, and metal panelling. To the front of the building is the new tourist office contained within a curving glass screen and masked by the projecting stone wall.

The ticket booths for vehicular access are given weather protection by large membrane structures which are designed to remind of the heyday of sail and Dun Laoghaire’s great maritime heritage. The end of the ferry service was announced in February 2015 ending almost 200 years of ferry connection with Holyhead in Wales.