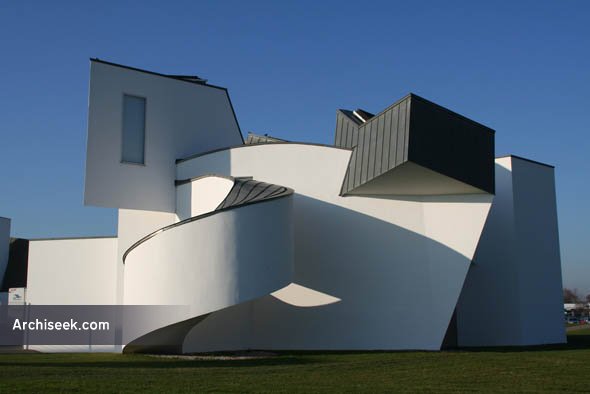 The museum building was Frank Gehry’s first building in Europe, realised in cooperation with the Lörrach architect Günter Pfeifer. Together with the museum, which was originally just designed to house Rolf Fehlbaum’s private collection, Gehry also built a more functional-looking production hall and a gatehouse for the close-by Vitra factory. Although Gehry used his trademark sculptural deconstructivist style for the museum building, he did not opt for his usual mix of materials, but limited himself to white plaster and a titanium-zinc alloy. For the first time, he allowed curved forms to break up his more usual angular shapes. The sloping white forms appear to echo the Notre Dame du Haut chapel by Le Corbusier in Ronchamp, France, not far from Weil.

“Using a palette of strongly architectonic forms, the formative ideas explored in his own house were further developed at a comprehensive urban scale in his design for the Loyola Law School….The result was large-scale disparate elements dexterously juxtaposed””thrust inward or conversely pushing outward””against buildings and urban sculptural elements that themselves were formally not reconciled in a traditional sense. It further evidenced Gehry’s interest in the discreet interlock of disparate forms which, through collision and seeming disorder, somehow combine to create a presence in resolution””probably the basic reason why Cubism and Expressionism is so obviously his connection to Modernism.

“This is readily apparent in his Vitra Design Museum, a small, 8,000-square-foot building on two floors basically for the exhibit of chairs, design, and educational programs. The building is a continuous changing swirl of white forms on the exterior, each seemingly without apparent relationship to the other, with its interiors a dynamically powerful interplay, in turn directly expressive of the exterior convolutions. As a totality it resolves itself into an entwined coherent display in much the same way that Gehry’s 1990 proposal for the American Center in Paris will likewise bring the disparate functional and spatial demands…into a more centralized though again a visually discordant, volumetric totality…” “” from Paul Heyer. American Architecture: Ideas and Ideologies in the Late Twentieth Century. p233-234.