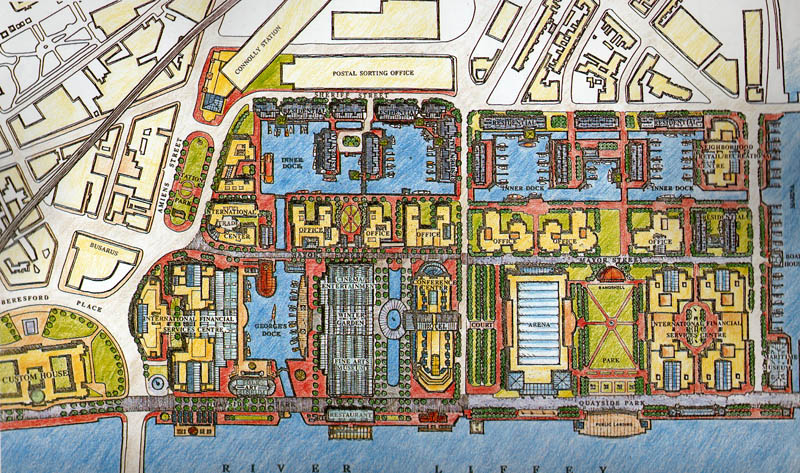 An early proposal for the Dublin Docklands submitted by Hardwicke Ltd. McInerney Properties plc, and The British Land Company. It ocused on recreational and social uses of the docks rather than business offices – lots of photos and drawings of people enjoying themselves, a small Financial Services Centre down beside Spencer Dock is almost an afterthought. In many ways closer to the redevelopment pattern of docks / wharfs etc in North America – including museums, winter gardens, cinemas, restaurants and bars – and open space / parks.

The architect was Benjamin Thompson, FAIA (1918-2002) of what is now BTA+ – they had worked in other harbours in Miami, Boston, New York and of course Baltimore of which this is most reminiscent. The local architects (licensing) were Burke-Kennedy Doyle. BTA did plan the AIB/IFSC buildings (designed by Burke-Kennedy Doyle) at the front but were frustrated in the process of rolling out the “social component” such as the museum, restaurants etc that actually won the competition. The developers managed to opt out of the various requirements to provide these in a phased basis because of financial necessity, first offices, and then housing.