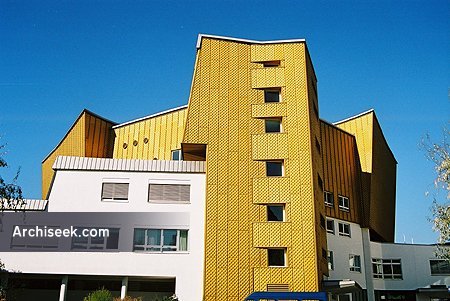 The construction of the Kammermusiksaal (chamber music hall) in 1987 completed Hans Scharoun’s concept for the Kulturforum almost thirty years after construction had started on the Philharmonie in 1960. The basic concepts of the building are clearly related to its next-door neighbor, the Philharmonie. The building is designed from the inside-out, with blocks of seating accommodating the audience in a 360 degree rake around the central stage. If the central stage arrangement was an experiment in the Philharmonie, it was taken for granted””and taken further””in the Kammermusiksaal; seats are configured to allow moving ensembles and experimental music, in which performers are placed in multiple locations