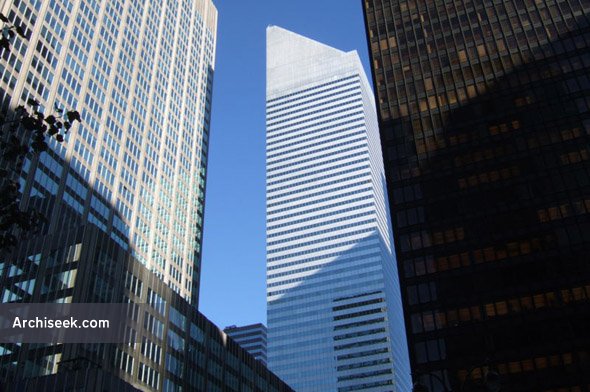 The Citigroup Center (formerly Citicorp Center) is one of the most distinctive and imposing in New York’s skyline, with a 45Â° angled top and a unique stilt-style base. It contains 1.3 million square feet of office space, and the 45-degree angle at the top of the building was originally intended to contain solar panels to provide energy

From the beginning, the Citigroup Center was an engineering challenge. When planning for the skyscraper began in the early 1970s, the northwest corner of the proposed building site was occupied by St. Peter’s Lutheran Church. The church allowed Citicorp to demolish the old church and build the skyscraper under one condition: a new church would have to be built on the same corner, with no connection to the Citicorp building and no columns passing through it, because the church wanted to remain on the site of the new development, near one of the intersections.

Structural engineer William LeMessurier set the 59-story tower on four massive 114-foot (35-m)-high columns, positioned at the center of each side, rather than at the corners. This design allowed the northwest corner of the building to cantilever 72 feet (22 m) over the new church. To accomplish these goals LeMessurier designed a system of stacked load-bearing braces, in the form of inverted chevrons. Each chevron would redirect the massive loads to their center, then downward into the ground through the uniquely-positioned columns.

Changes during construction led to a finished product that was structurally unsound. In 1978 LeMessurier became aware of a series of events that could create a “perfect storm” that would bring the building down – a combination of wind shear and financial-led shortcuts in the construction. He approached Citicorp directly and advised them of the need to take swift remedial action, ultimately convincing the company to hire a crew of welders to repair the fragile building without informing the public. For three months, a construction crew welded two-inch-thick steel plates over each of the skyscraper’s 200 bolted joints during the night, after each work day, almost unknown to the general public. Because nothing happened as a result of the engineering gaffe, the crisis was kept hidden from the public for almost 20 years.