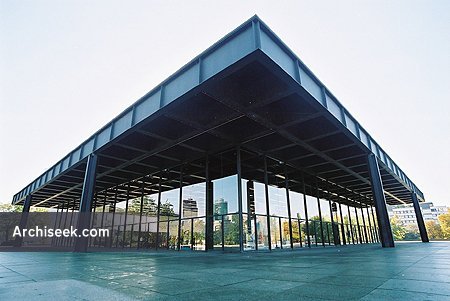 The design idiom of Mies van der Rohe is familiar to all from its adoption by the corporate world and its many ‘copies’ around the world. Like a classical temple, this building of steel and glass is a large single storey structure on a large granite podium. The podium is approached by several flights of stairs. A steel structure supported on posts around the perimeter (with none at the corners) the interior is a vast open space. Most of the collection is displayed in gallery space in the podium with an outdoor sculpture court to the rear. Despite the apparent heaviness of the roof, the building looks incredibly light and airy – the ability to see through the entire building suggesting an outdoor space rather than a building.